In Need of Healing Power

It was a Spartan Super in Michigan, and the obstacle was the eight-foot wall. Jimmy Choi, 41, charged it, took hold, and hung from the top like a limp rag. He wasn’t exhausted. His muscles weren’t fatigued. His body was just lagging behind his brain. It took a moment for his legs to reactivate, and when they did, Choi clambered up and over the wall like the other competitors—just with less fluidity.

Parkinson’s is a disease not commonly associated with strong, young athletes. Only about 2 percent of people with the neurodegenerative disorder are diagnosed before they turn 40. Choi was diagnosed at 27. He was undergoing a routine physical when the nurse, who also worked at a neurologist’s office, noticed that he wasn’t swinging his arms when he walked. At her suggestion, Choi went to see a specialist. But the doctor’s verdict, early-onset Parkinson’s disease, didn’t make sense, so Choi saw a second doctor. Then a third. Each time the diagnosis was the same.

The reality set in, but in the years that followed, Choi let his disease drag him down. For eight years he slacked on his meds, skipped follow-up appointments, and generally resigned himself a life of someone with a degenerative disease. By the time he turned 35, the once active man weighed 240 pounds and was walking with a cane.

It raises the question: What limitations have you accepted? What obstacle have you already let defeat you?

‘I Will Not Be a Danger to My Family’ 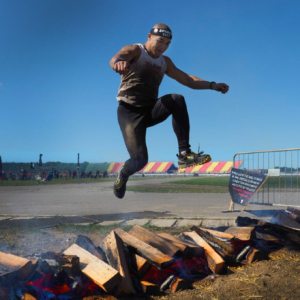 Then came the moment that changed Choi’s life for the second time. While walking down the stairs with his then 10-month-old son cradled in his arms, Choi lost his balance. He tumbled down the stairs, but miraculously, he managed to keep his son’s body above his own. Choi himself escaped with only sores and bruises. But the fall was a wake-up call that made him acknowledge how complicit he was in his own poor health. “I vowed that from that moment on, I would not be a danger to my family,” he says. “I vowed that I would not allow my wife to have to care for not only our two kids, but for me as well.”

Choi set out with a new sense of purpose. His first step was to enroll in clinical trials that researchers were using to help find a cure for Parkinson's. Several of the trials were built around physical activity, like using a stationary bike or elliptical, walking and running, and calisthenics. He noticed that the harder he worked during those sessions, the better he felt. So he began expanding on those workouts outside of the clinic. He walked a lap around his block with the help of a cane and his wife by his side. Then he walked two laps—then three, then four. He lost weight. He ditched the cane. Walking turned into jogging, and he continued to feel more power over his disease.

Choi Writes His Own Prescription: Exercise

Talking about healing power, staying active is the best way to manage, and even slow the progression of, Parkinson’s, and according to the National Parkinson’s Foundation, regular workouts reduce tremors and improve balance and motor coordination among those with the disease. But Choi sees his new lifestyle as an essential part of living—regardless of what your situation might be. “Whether you’re a healthy person or someone dealing with cancer or multiple sclerosis, it doesn’t matter what you’re facing,” Choi says. “It’s logic: If you make your body healthier, you’re going to feel better. I don’t understand why everyone doesn’t do it, because it’s so simple.”

On paper, and possibly even in person, you wouldn’t know that Choi has Parkinson’s today. His transformation borders on unbelievable: He’s run 14 full marathons, 93 half marathons, and countless 10Ks and 5Ks. In 2016, he became the first athlete with Parkinson’s to complete a 100-mile bike ride in under five hours. This spring, he was on American Ninja Warrior. And after that, he became a Spartan.

“As I’m doing more and more obstacle-course training, it’s actually making me a better Parkinson’s patient,” says Choi, who takes just eight pills per day now compared to the 16 pills he was taking three years ago. He attributes his progress to the healing power of running, strength training, and the Spartan mentality.

“Living with Parkinson’s is like an everyday obstacle course,” he says. “When you need to get across the room, any little thing that’s in your way can become an obstacle.”

With the help of his family, Choi has raised more than $100,000 for the Michael J Fox Foundation, partly as a sponsored athlete for Team Fox but also through the Shake It Off 5K, an annual event Choi and his wife founded in 2015. As his symptoms continue to improve through the healing power of exercise, he’s setting sights on his next Spartan race. He’s hoping to conquer a Beast by the end of the year.