The first thing Jennifer Sutch noticed was the rain. You couldn’t not notice it. It had been rainy and misty the whole day. Jennifer and her team from Shriners Hospital for Children had been at the Spartan race course in Houston, Texas, filming a commercial for the development department, which she heads, and at this point everyone was cold and tired.

Then she noticed a small figure at the spear challenge. He was hurling the pole that replaces the spear in the kids’ race toward the target. Again and again he did it, hitting the mark each time like a Spartan pro. 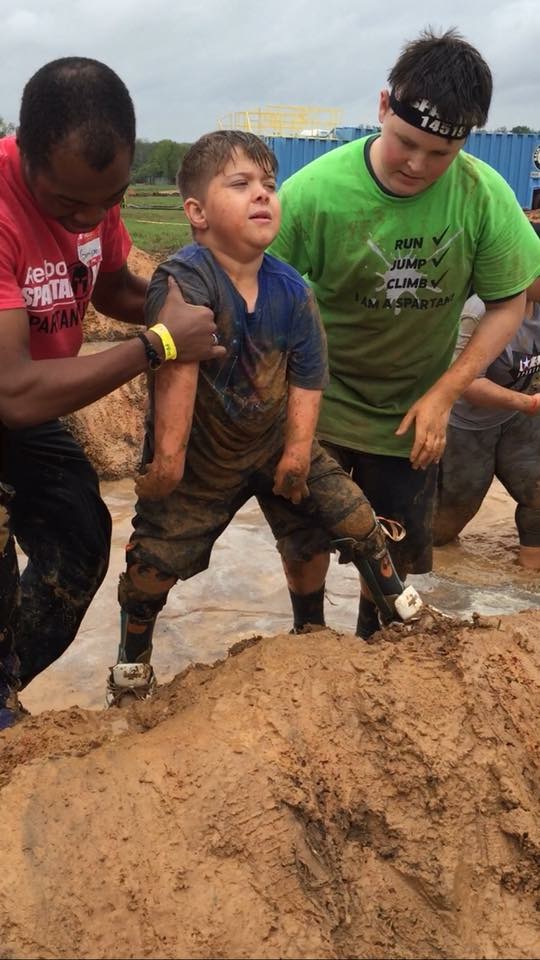 “That was Deaken,” Jennifer says. “He has a condition called arthrogryposis, which means that many of his joints are very stiff. He often wears leg braces, and sometimes uses a wheelchair. But that day he had decided that he was going to complete the kids’ race course.”

The challenge of some of the obstacles was immense, and young Deaken had to think creatively about how best to overcome them. “The spear throw might have been a big problem,” Jennifer explains. “Because of his condition, he can’t throw overarm. But he can throw sidearm. So he did this, and that turned out to be a great idea because he hit the target. And because he could do it, he just kept doing it over and over again. It was really amazing to watch him figure that obstacle out in a way that would work for him, and keep doing it, and feel really proud of himself.” 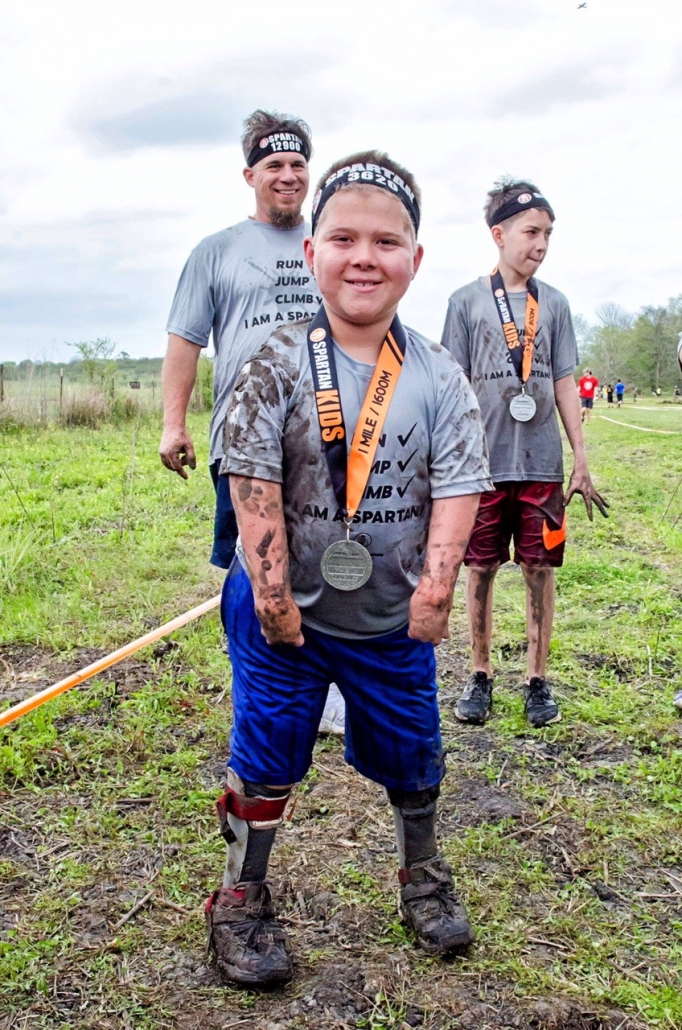 “A few weeks after the race,” Jennifer continues, “His mom called me to ask where she could get another Spartan T-shirt because she was having to wash this one every day! It turns out Deaken didn’t want to wear anything but his Spartan shirt, and was even wearing it along with his medal to bed!”

Jennifer tells this story as an example of the empowerment that overcoming seemingly insurmountable difficulties can give to a child, or anyone, she says, who needs to believe in their own abilities. “It’s definitely something that both Shriners Hospital for Children and Spartan have in common—this notion that there’s more in you than you think there is.” In fact, it’s this commonality that has made the nearly three-year-old relationship between Spartan and the pioneering 100-year-old hospital organization so meaningful. 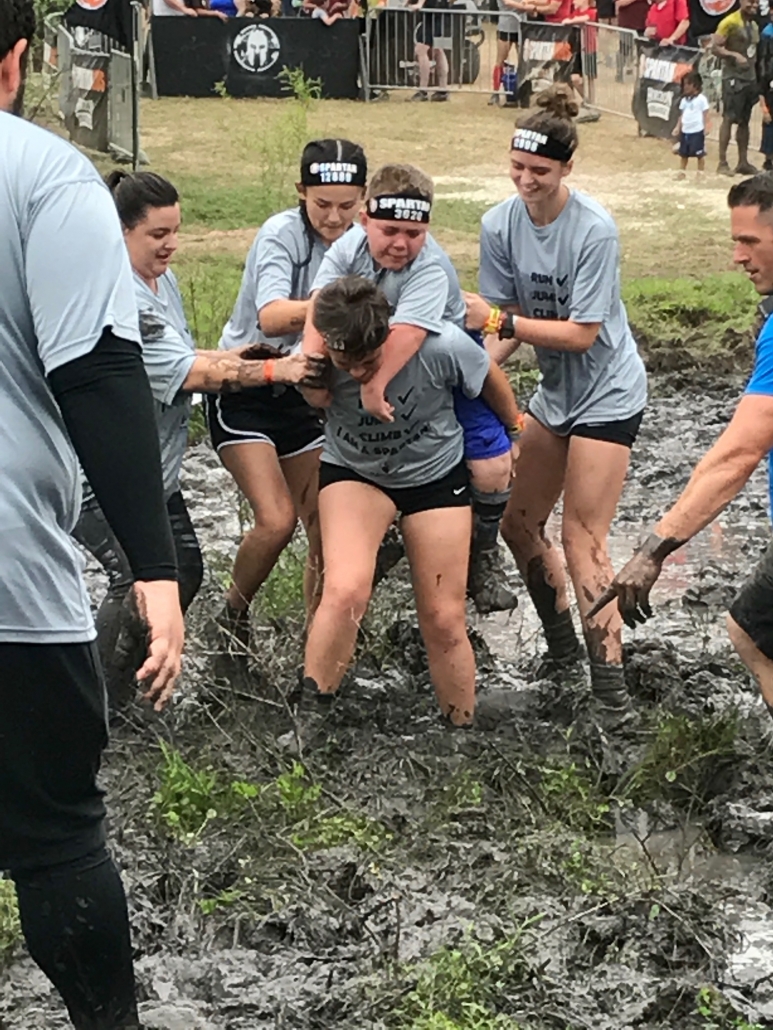 Jennifer first began organizing patient families and Shriners staff to take part in Spartan races after she and the second-oldest of her four children, David, met with former Spartan world champion Robert Killian at a US Army Best Ranger Competition. “My son wants to be a US Ranger, and so we have gone to watch the competition for many years now,” she explains. “As Robert is a US Army Ranger and participates in these competitions, we got to know him and his wife, Maxine.”

Donate Now to the Shriner Hospital for Children for National Giving Day.

When in 2016 a Spartan race was part of the competition, the toughness but obvious fun that made the race so special got Jennifer thinking. “I had recently joined the Shriners Hospital for Children, and I was looking for new and exciting ways to engage donors, and I thought: ‘Could a Spartan race be something that kids with prosthetic limbs or other kinds of orthopedic diagnoses could participate in?’” The answer was yes.

Robert put Jennifer in contact with Daniel Goldstein, director of the Spartan Kids Foundation, and a relationship between the two organizations was born that would change many kids’ lives forever.

“It’s been a wonderful opportunity to enable the children, their families, and the staff at Shriners to engage with the Spartan community, which really is a community in every sense of the word,” she says. “It’s been really life changing, especially for many of our patient families. They get to witness their children overcoming obstacles in the moment, which is so powerful. There are so many synergies between the two organizations, not least that these races continue and enhance our own belief at Shriners, that even if people have told you ‘no,’ this shouldn’t ever stop you.” 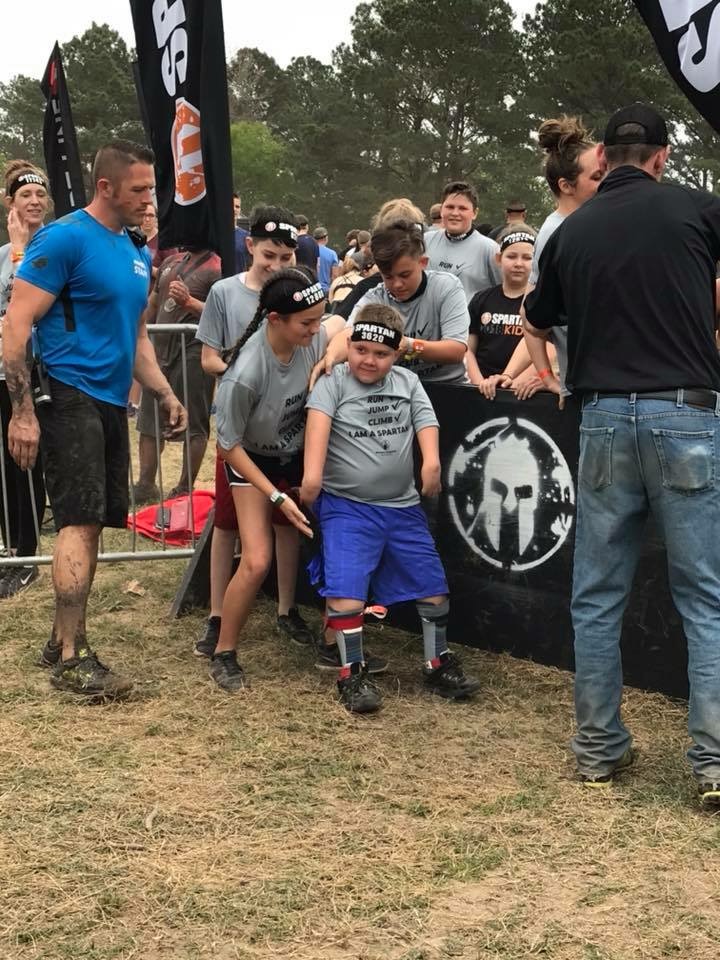 In her role as director of development at Shriners Hospital for Children–Twin Cities, Jennifer also follows that idea of pushing forward regardless of the mountains that may need to be climbed. “In 2018 we participated in six races. And next year, we want to participate in 10 to 12 races. A number of our hospitals are located within 45 minutes to an hour of each race, so we have a great opportunity to engage our constituents to come out and be a part of the Spartan event, integrating both communities for the greater good.”

That’s why on Giving Tuesday (November 27), Jennifer and her team are calling on Shriners  supporters and friends to join them in raising $100,000. “We received a $100,000 gift from a very generous donor, and we want to match it,” she explains.

“We know at Shriners Hospital for Children that our kids have no limits because our donors and supporters care so much about them, and they are very generous in their giving. We know they’ll step up to this opportunity too and help us in this donor challenge. And as a thank-you, Spartan has very generously offered us an opportunity to provide a 20 percent discount to all Giving Tuesday donors for any Spartan race still in 2018 or in 2019.

“The money raised will support the work that Shriners International does in bringing children and their families out to the various Spartan races. We’ve seen the life-changing effect of these races on the kids, and we’re so grateful to Spartan for providing a fun opportunity that allows kids like Deaken and others to overcome challenges and show the mental toughness, resiliency, and grit that lives inside of them.”

And no doubt, Deaken himself will be there to compete again. After all, he needs another T-shirt!

Donate Now to the Shriner Hospital for Children