Samuel Koehler (Instagram: @shades_ocr) has yet to encounter an obstacle on the Spartan course he can’t conquer. And his parents have yet to find a reason to doubt their son will climb every wall, and scale every last hurdle life puts in his way.

The 11-year-old, who lives near Atlanta, Georgia, races competitively about once a month across the South and has reached the podium in every one of his eight races. He's also captured three Trifectas.

All of this is impressive enough, but made stunning when you learn that Koehler is visually impaired. Koehler has achromatopsia, a rare eye condition that affects an estimated one in 30,000 people worldwide and is characterized by a partial or total absence of color vision. It seriously limits Koehler’s ability to see during the day, so he wears dark glasses to improve his vision during daytime hours.

Hi my name is Samuel. I have a visual impairment called Achromatopsia, which causes me to not see color, not to see very far and bright lights blind me. I discovered OCR last year and ran my first race in April of 2018. Last year I did several kids races but always ran with a guide, my sister @heart4ocr . ⁣ ⁣ At the beginning of this year I asked my parents if I could run competitively. They were nervous but allowed me to run my first competitive race in Saraland Alabama. The first day I was excited but nervous, while running I fell several times but got right back up and came in 4th place. I wanted to try again the next day and see if I could make that podium. So on Sunday I went out and gave it my all and got 1st place and my mom cried.⁣ ⁣ I have ran a total of 7 competitive races this year and made podium six times. 1 🥇, 3 🥈 and 2 🥉. I love OCR races because they are fun challenges. They have fun obstacles and you always get to meet new friends. ⁣⁣ ⁣⁣ OCR has allowed me to meet some amazing athletes as well, one of which is Blind Pete. He is my inspiration. He races without any vision and makes no excuses. I hope to inspire others to race too just like Blind Pete inspires me.⁣⁣ ⁣⁣ ⁣⁣ #spartankids #spartanrace #spartankidsrace #spartankidsrace2019 #spartankidsworldchampionship2019 #adaptiveathlete #achromatopsia #ocr #fitkids #fitkid #theocrboys #ocrboy #ocrboyshades #ocrboys #noexcuses #obstaclecourseracing #mudrunguide #alwayssmiling

It’s not a perfect fix—he still struggles at times with obstacles, uneven terrain and even tree branches that line the course—but Koehler has become an inspiration for others overcoming physical challenges to place in a race.

“He always says that it’s just for fun, but then right before the race, he says ‘I’m going to get on that podium!’” says Samuel’s mother, Debbie Koehler. “He has a lot of fun, but he really pushes himself.”

Related: What Spartan Means to Me, As a Mother

The Koehler family came across Spartan via a TV commercial years ago, and quickly signed up for their first race. All five of the Koehlers compete regularly--parents Debbie and Josh, plus Samuel and his older sibs Rachael and Elias—driving as long as seven hours to get to Spartan races.

It’s Samuel, however, who has made perhaps the biggest impression on the course and gotten the most in return.

His visual impairment largely ruled him out for sports like baseball, football and soccer—he has trouble tracking a ball when it’s headed toward him. But in Spartan, he’s found his groove, along with a swelling sense of pride when he returns to school Monday after winning a weekend race.

“If there’s someone in my class who comes to my school talking about a guy who won a NASCAR race, I feel like him. I feel like a winner too,” Samuel says. “He won at NASCAR, and I won a Spartan race!” 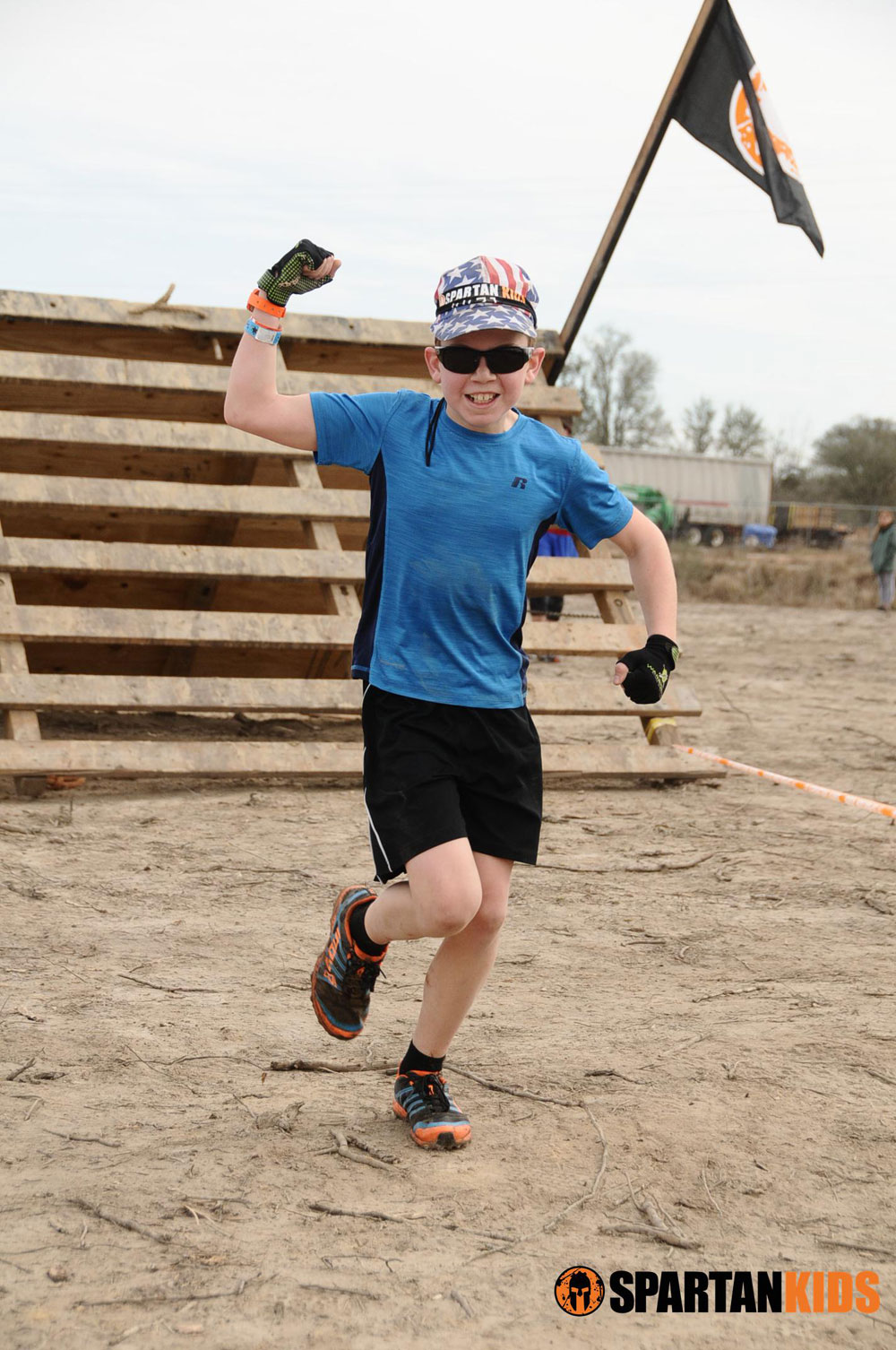 It hasn’t been easy. When Samuel first participated in 2018, he ran in a non-competitive race with his sister Rachel, 13, serving as a guide. Soon, he summoned the courage to compete unassisted in his first race of 2019 in Saraland, Ala.—and finished fourth while his parents anxiously cheered him on.

“It was very nerve-wracking for my husband and me,” Debbie Koehler says. “We knew he would fall. He would run into trees. He might even wander off course because he can’t see the orange tape that lines the course.

“But as parents we don’t want to hold him back, so we just thought, ‘Why not?’”

Samuel remembers the difficulties of that race vividly, but says that once he got the lay of the land, he was able to return to the course and find his footing. He often puts his elbow or arm out in front of him while he runs, to shield against obstacles he might not see until they’re up close.

“The first day on a course I usually fall and scratch myself the most,” he says, “but the second day is much better.”

Related: Train Like a Champion: A Q&A with Rebecca Hammond

The Koehlers are much better too, thanks in big part to their passion for Spartan. As they’ve traveled to events across the South, they’ve bonded as a family and won their share of silverware. But it’s Samuel’s personal growth that’s most apparent.

“It has given him more confidence, and his friends have really gotten to know him and understand his visual impairment,” says Debbie Koehler. “A lot of people where we live, they don’t understand what he faces every day, and I don’t think they’re willing to work with him as much. But these races, and the kids he’s befriended through competing, they just give him so much to look forward to.”