Whether you're a team captain, an HR professional, or a C-level executive responsible for employee performance, we're here to help you innovate corporate wellness and culture the Spartan way. From our SpartanX Leadership series to 30-day fitness challenges, we've got you covered. Click here to get going!

Last year, in a podcast about the difference between motivation and purpose (The Cleared Hot Podcast, episode 14), Andy Stumpf — a retired Navy SEAL — shared a story about getting involved in a disturbance between a drunk couple at a restaurant. It was not the kind of thing he or anyone would want to get tangled in, but for Stumpf it was about being committed to a purpose and doing the right thing. Here's his take on how to lead by example.

Lead By Example: The Short Story

Stumpf was dining in the restaurant with his wife and kids. The man and woman had just rushed back into the establishment to use the bathroom after being kicked out.

“We need to hurry up,” Stumpf heard the man say. “They’ve called the cops.” Stumpf also heard him rant about being bounced after spending $250 at the bar.

The last thing Stumpf was looking for was a fight. “I’ve had enough confrontation in my life,” the combat veteran says. Circumstances, however, demanded his involvement.

For one, Stumpf’s kids—both startled by the unfolding ugliness—were watching, kids who he routinely dropped off at school with the parting words of: Stand up for what you believe in and do the right thing. Now they would be witness to whether these were merely words or the real thing.

The reason it is was the right thing for Stumpf to get himself ensnared in was the two-year-old the drunk woman was carrying. Stumpf watched as the child, eyes glazed over in a kind of shock, hit his head on the door jamb of the bathroom as the woman fled toward the exit.

Stumpf, knowing the police had been called, went to block the couple’s rush for the exit. His intention being to prevent two adults with $250 of alcohol in their systems get into a car with a child and to slow them down long enough for the police to arrive.

It’s an excellent podcast and I recommend it. Also a former BUD/S instructor, Stumpf has exceptional insights into the subjects of motivation, purpose, and discipline. He shared the story as an example of why it’s important to clarify and live by a strong purpose. It was an ugly situation where the welfare of a child was in jeopardy (Stumpf watched the couple put the child in a car seat but didn't strap him in) and the right thing was to help stop the car and support the authorities and child services in doing their job.

Lead By Example: Making a Contribution

I was reminded of the thesis of Stumpf’s podcast when reporting around the tragic fire in the Bronx revealed how an immigrant from Ghana, Emmanuel Mensah, a 29-year-old U.S. National Guardsmen, had saved four people from the fire after first escorting an entire family to safety. In trying to save more, he succumbed to smoke inhalation and was one of the 12 who died.

Mensah, who had won an award for marksmanship, was on leave after finishing Basic Training at Fort Lee. He was planning on a 31B military occupational specialty: military police. United States Senator Chuck Schumer has requested a posthumous honor for Mensah.

The story of PFC Mensah’s sacrifice was yet another the staggering list of heroic exploits made by Americans in the military. The toll is painful to compare to the image of civilians holding up their cell phone cameras in Stumpf’s account at the restaurant.

In another podcast of Stumpf’s, he talked passionately about the value of service and that it’s his contention that you don’t have to join the military to make an invaluable contribution. The motto he uses as a sort of tag line for his show is “Be The Example.” Which was in part why he acted at the restaurant. It was both the right thing to do and also he wanted to be the example for his kids.

I’ve been thinking about Stumpf’s remarks this year as important to consider when figuring out a “why” for exercising and eating right. The first step toward being able to do the right thing when a situation demands it is to be fit enough to do something without making things worse. It’s not a given.

To the left of my computer, as I type this, I have a report from the new issue of Experience Life Magazine on the state of Type 2 diabetes in the USA. As usual with these reports, there are a lot of harrowing numbers. The one that stands out here is a 300-percent increase since the 1970s of severely obese American kids and teens, relayed from the Center for Disease Control and Prevention. “In youths ages two to 19, 17 percent are now considered obese; an additional 16 percent are overweight.”

Also, an annual report produced by HealthyAmericans.org commented on the enormous financial costs of obesity in the U.S:

“The obesity crisis costs our nation more than $150 billion in healthcare costs annually and billions of dollars more in lost productivity.”

A First Step Toward Being The Example

Hence, in committing to a principle like “Be the Example” or “Do the Right Thing” a valuable thing that I can do, for starters, is to not be on the wrong side of these numbers; avoid being part of a problem steadily eroding foundational aspects of society’s present and future.  There are a lot of good reasons to become fit and develop a robust state of health. A great one is to be able to be a person that can stand up and be the example when the time comes. It seems like a start on how to honor the enormous sacrifices made to protect our freedom. As Joe De Sena reported last week in an open letter, the Spartan Community has made significant strides toward pushing back against obesity trends. And there are new forces joining the fight, like Virta Health, with their mission of reversing diabetes — without medications or surgery — in 100 million people by the year 2025. 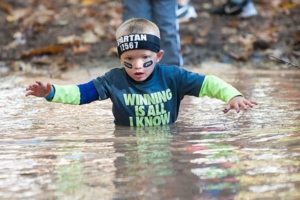 Which comes to my purpose as editor of Spartan Life. I have a long history in fitness, health, exercise, running and more along those lines. I realize (now more than ever with a four-year-old boy and 10-month-old daughter that keep my wife and I plenty busy) that there are obstacles and problems that can make it an uphill battle. Problems, a.k.a. excuses, often have very good and very simple solutions. Whether the obstacle is age, injury, time, fear, you name it, I feel like it’s my job to find those folks out there that have great ideas and information on how to solve the problems and help them get their words out so that those like you and I can get on the path and stay on the path and do a good job of being the example and doing the right thing.

Want to amp up your fitness routine and get inspired by the OCR mentality? Sign up for a Spartan Race today!