What kind of person is drawn to Spartan and other obstacle course racing? We had a hunch that it’s a person similar to those who tackle Ironman, and got to thinking that maybe such people might be uniquely prepared to find success in Ironman racing—the big daddy of multisport.

To test our theory, we talked to a handful of athletes with experience racing both types of events. We came away with 10 reasons why going from climb-lift-crawl to swim-bike-run makes perfect sense.

1. You have the hunger

“To be a great Ironman athlete or a great Spartan athlete, you just have to have grit. You have to be willing to push yourself to the limit,” says Heather Gollnick, former pro triathlete and five-time Ironman champion. Gollnick is now a member of the Spartan Professional Racing Team and coaches athletes in both sports.

Gollnick says both types of events (obstacle races and Ironman) require this basic desire: “If you’re starting on the couch, doing a Spartan race is about taking your body to that next level. And it’s the same with Ironman—whatever your current fitness, you have to have that desire to take it to the next level.”

Plus, once you’ve progressed through the various distances in your sport, you tend to seek out new challenges. “I see Ironman athletes who are getting into Spartan, and I see a lot of athletes that have been doing Spartan racing for three or four years, and now they want to try a half or full Ironman,” says Gollnick. “Once you become that type of person, you’re naturally going to ask, ‘What’s next?’”

2. You’re drawn to the impossible

Ron Searle began doing Warrior Dash races before Spartan and other similar obstacle races were even a thing. The 46-year-old got his endurance racing start in short-course triathlon, then took on OCR before ultimately making the leap to Ironman. For Searle, the impetus for both was the challenge, and the desire to push himself “to do things I never thought a fat guy could ever do.”

Searle writes the blog Fatman2Ironman, the title reflecting his own journey. “Although I was getting healthier doing shorter triathlons, I was still fat, still slow, and still not sure what I could do,” he says. He ran the inaugural 2009 Warrior Dash obstacle race on a lark, and says he absolutely amazed himself: “In 2008 if you would have told me I could haul myself up and over a five- or six-foot wall, I would have laughed. In 2009, I did this and much more. I was amazed what my body was capable of.”

3. You have the confidence 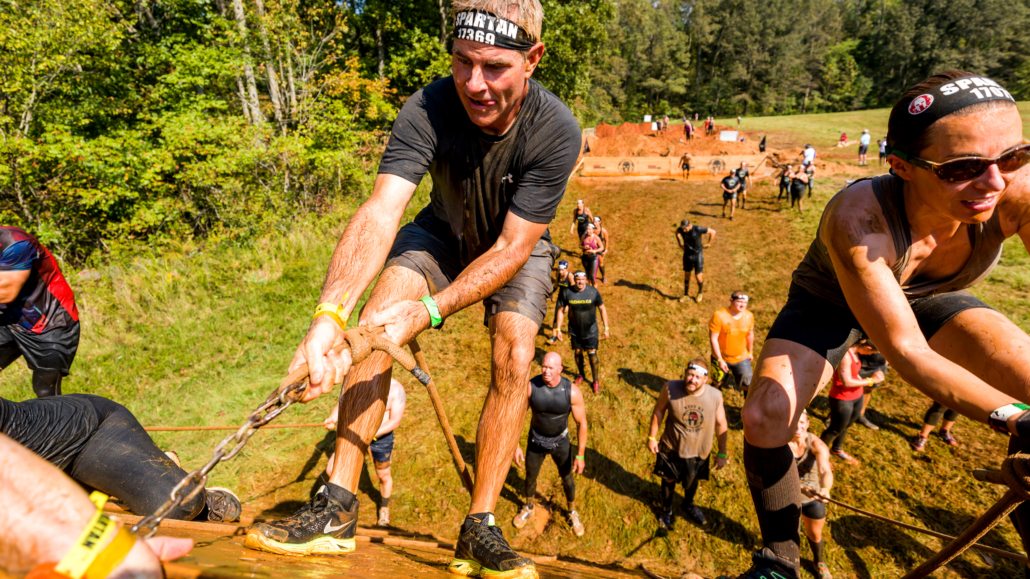 “When I decided to attack the 140.6-mile distance, I took this newfound confidence and harnessed it into motivation,” continues Searle, who tackled Ironman Coeur D’Alene in 2011 and Ironman Wisconsin in 2015. “Being a big guy, 140.6 was hugely intimidating. The Warrior Dash really helped give me the confidence.”

Searle’s confidence, even in the face of the unknown, is common among Ironman athletes, and is summarized nicely on his Facebook page, where the intro states: Some don’t because they might not. I do because I might.

4. You stand out from the crowd

“Insanity. Is that one of the requirements for both sports?” jokes John Post, a 69-year-old, six-time Kona finisher who now enjoys obstacle racing. For Post, a retired doctor who now consults and writes for numerous endurance sports organizations and publications, the common threads between obstacle races and Ironman include the sense of joy and accomplishment after finishing, and the feeling that you’re doing something different than the average Joe.

“What are all your friends doing right now?” asks Post. “They’re watching the football game. They’re taking a nap. Our swim group swims at 5:30 a.m., and I think none of my high school classmates are swimming at 5:30 in the morning. But I like it.”

Fifty-year-old Mark James raced triathlon from 1985 to 2005, competing in Kona from 1991 to 2001 before taking a decade off to raise kids, work two jobs, and fix up a house. Then he got into OCR, and realized that both sports require a certain amount of cross-training.

“The training is somewhat similar, although now I seldom ride and I swim only two days or so a week,” he says. “My runs are in sand or on trails from 3 to 12 miles, and I spend a lot of time on the obstacle course we have at SEAL training where I live in Coronado [California]. I climb a bit, too, and focus on OCR-type workouts—pullups, crawls, cargo net climbing, etcetera.”

6. You love the work 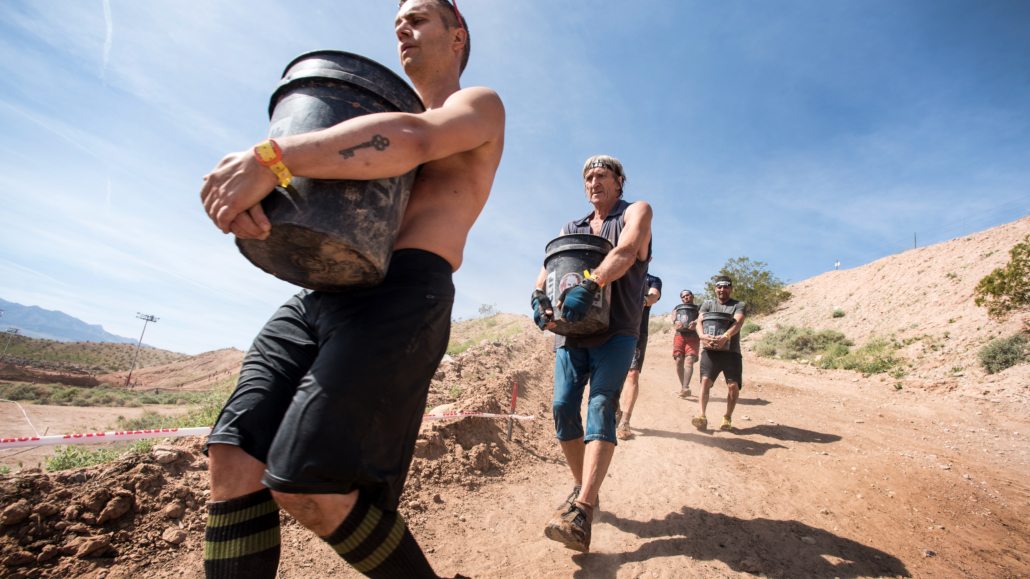 According to Gollnick, the focus on physical training is parallel in both sports. And in both, you have to love the process. “If you’re training for Spartan, you need strength, power, and endurance—and all of those are also what you need for Ironman. You have to be willing to put in the time and the training and do what it takes to be ready. I think to do a Spartan or to do an Ironman, you have to love to train.”

“Once you become that type of person, you’re naturally going to ask, ‘What’s next?’”

In Spartan races, 47-year-old Gollnick says she competes with women half her age—some the age of her kids. “And I don’t think it’s because of my fitness,” she says. “I think it’s because of the mental fortitude that I’ve learned from doing 36 Ironmans—how to push myself and how to overcome.”

She adds that there’s never a perfect Ironman; athletes have to keep pushing through various obstacles, so to speak. “You overcome dropping your water bottle, or having bad nutrition, or having cramps, or whatever it may be,” she explains. “Overcoming all those obstacles is very similar to overcoming physical obstacles in a Spartan race.”

When a Spartan athlete approaches her about doing a triathlon, she knows they’re going to encounter the same thing, just different. “But,” she adds, “it’s amazing how the mentality of the athletes is very much the same.”

8. You’re not afraid to fail

Most athletes who take on multisport events are not necessarily skilled in every discipline. James was an especially fast swimmer, which helped when it came to triathlon, but not so much in OCR. In 2015, he did his first obstacle race, and got “full tilt into it,” as he says. He’s now an ambassador for Tough Mudder and is doing quite well in his 50-to-54 age group.

Post echoes the sentiment, explaining that failure can even add to the fun. “You just have to dive in,” he says. “Most likely you’re not great at every obstacle, and not every triathlete is great at all three sports. But you fall off, you smile, and you go onto the next obstacle.”

9. You’re comfortable being dirty and ... uncomfortable 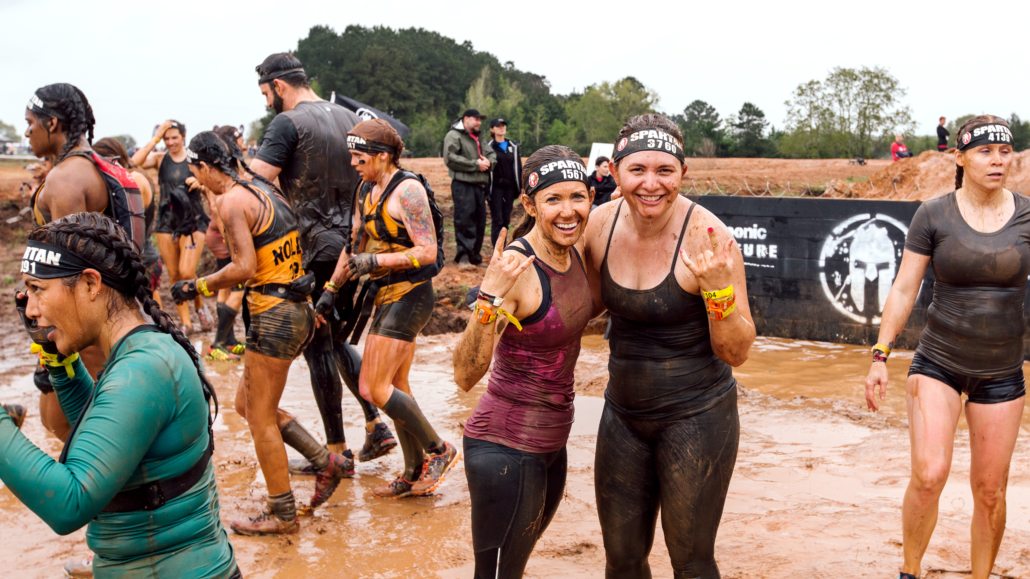 OCR athletes have no trouble at all with the dirty, grimy feeling at the finish of an Ironman—or being covered in sticky sports drink, sweat, and other unmentionable bodily fluids. For them, filth is part and parcel of the experience.

Post tells this story: “I did one obstacle race where the final obstacle was a slide down black plastic into a muddy pit. Some people were going feet first and some were going headfirst, so I figured, ‘There can’t be anything in that water except maybe another racer, so I’ll go headfirst.’ About halfway down, just as I picked up max speed, I realized that the course was on a working cattle farm. There was poop everywhere, including in the water. Splash!”

“I think both obstacle races and Ironman require an equal amount of mental fortitude, preparation, and sacrifice,” says James. “And ultimately, they are both great avenues to stay fit, meet people, and get after it.”

Searle agrees: “Both are for people looking for a challenge, people wanting to push themselves physically and mentally. Also, beer. Both groups like drinking beer.”

Gollnick, however, does have one warning to Spartan athletes considering the Ironman challenge: Triathletes can be a little, shall we say, detail-obsessed. “In triathlon, everything is exact. The distances are precise. People get bent out of shape if a 6.2-mile run is 6.3 or 6.1,” she says. “Obstacle racing is so different because it’s on the trails and through mud and creeks and water, so everything is ‘ish.’ A Spartan Sprint is 4- to 5-ish, a Super is 8- to 10-ish, a Beast is 13- to 16-ish, and an Ultra Beast is somewhere around a marathon.”

So if you're a persistent, confident, sweat-loving, cross-training exercise junkie who can handle a bit of the type-A tendency to stick to strictly prescribed distances—you’ve already got a leg up, physically and mentally, in the journey to Ironman.

This article originally appeared at ironman.com and has been reprinted and adapted with permission. Read the original article here.

Holly Bennett is a long-time freelance writer and triathlon journalist. When not immersed in her Mac, you’ll find her running, cycling, swimming, fine-tuning her foodie fascination, digging deep into a Malbec, or plotting her next active adventure around the world.