That’s what Guy Carbajal’s daughter said in September 2016. She hadn't seen her dad in nine months, and the 54-year-old man before her looked way smaller than she remembered. He hadn't literally lost half his body weight, but he was transformed. He'd gone from 220 pounds to 175, enough to completely reshape his 5’5” frame.

The metamorphasis had begun 10 months prior, as Carbajal followed his new girlfriend, Julie De Anda, to a Spartan Race in Long Beach, California. “Everyone was having such a good time,” he recalls. “And was feeling left out.” The race participants were a fit group, but he noticed that some were carrying extra weight, like him. Some were carrying even more. “They were crawling through the mud and their friends were helping them climb up a wall, and I thought, ‘I have bad knees, but I could still do this,’” he says.

A Spartan is born.

Luckily, Carbajal wasn't starting from scratch. He'd been riding his mountain bike two-to-four times a week. But his diet was holding him back. “I was rewarding myself with a pitcher of beer and half a medium pizza after each ride,” he says. “I knew I needed to do something [to lose weight]. I couldn’t go down stairs without holding a handrail.”

Carbajal joined a gym, and with the help of De Anda, he started to clean up his diet. Along with pizza and beer nights, he gave up sugar and dairy and drastically cut back on carbs. To stay motivated, he and De Anda dropped a few local races on their calendar. They started with a short mud run in March 2016, and then they ran a longer 5k mud run. After that, Carbajal ran his first Spartan Sprint and Super.

Along his journey, Carbajal discovered an unexpected side effect. As his fitness leveled up, so did his relationship. He and De Anda started leaning on each other for strength during training and moments of dietary weakness, and they learned to race as a team. “My heart rate is high in the beginning, and hers is at the end,” Carbajal says. “So I’m pulling her along during the first half of the race, and she’s pulling me along in the second.” When they encounter a wall, De Anda pushes Carbajal over first. Then, since she has a fear of falling, he runs back to spot her as she climbs over. De Anda says it’s their “thing.” 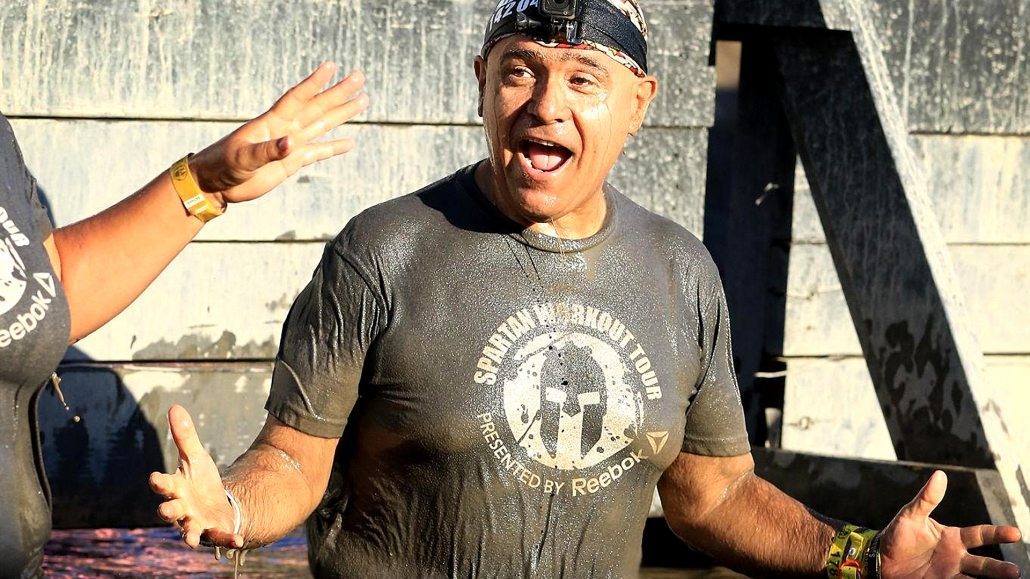 This year, Carbajal and De Anda have completed three trifectas. In less than two years since starting his Spartan journey, Carbajal, now 56, has noticed a big uptick in his health. In addition to being 45 pounds lighter, his resting heart rate is down from 73 to 51 beats per minute. “And I’ve seen changes in my legs that I had no idea I could have at this age,” he says.

But health is only part of his motivation. The relationships are what truly keep him pushing through each obstacle. He and De Anda race together, sure. But each Spartan Race brings out a whole group of people who have turned their lives around. “A big part of the joy I get out of this is this community,” Carbajal says. “We hug people and ask how they’re doing. That’s what Spartan is all about—it’s a family thing.”

Health, love, and community. It's a trio that serves as its own victory. “I was just existing before,” says Carbajal. “I wasn’t living my life. Now I am.”

Looking to join Guy on the course? Download The 2018 Spartan Race Schedule. #noexcuses

Moira Lawler is a graduate of Northwestern University's Medill School of Journalism. She writes about a range of lifestyle topics, but she loves health and fitness the most. When she’s not writing, you'll likely find her running along The 606 trail in her hometown of Chicago.