Ismael “Is” Campos spent 26 years working his way up to lieutenant colonel in the U.S. Army, and back at home, his military training cut a model of discipline for his daughter, Vanessa Lynn Campos. She looked up to her father, but as is often the case, he and she struggled to stay close as she grew up and moved out.

Is was a naturally reserved man, and Vanessa spent her 20s and 30s focused on starting her own family, building a career as a modern dancer, and growing a personal training business near New York City. She loved her father, but Is and Vanessa were separated by a 25-year age gap, hundreds of miles (he spent most of his time in Florida), and all the challenges of trying to bond as two adults.

A few years back, Vanessa discovered Spartan. She loved it for the fitness aspect, and even became a brand ambassador. But something in the discipline of training for obstacles made her think of her military father. One day it occurred to her: This was something they could bond over. This would help them finally reconnect on the other side of her childhood.

“I feel like I’ve gone through such an enormous transformation—not just physically, but just emotionally and mentally,” says Vanessa. “This was my way to reach out.”

Last Thanksgiving, during the family gathering at Is’s retirement home in Florida, Vanessa proposed the idea: They should run a Spartan race together.

The idea sounded crazy at first. Is was about to turn 65. But Vanessa used that to help sell the idea: They both had big September birthdays (she'd be turning 40), so they'd run a Spartan Sprint in celebration. And in honor of Is’s military career, they’d enter the West Point USMA Sprint in Central Valley, New York. The race was at the end of August. That would give Is nine months to train.

Since leaving the military, Is had let his fitness slip. He wasn't so sure about running a Spartan Race. But after sitting on the idea for a few weeks, he came upon Spartan’s Couch-to-Sprint Training Plan. “I looked at that, and I thought, boy, that looks doable,” he says. In January, he told Vanessa he was in, and his training began in earnest.

Encouraged by his daughter, Is launched into a transformation that was nothing short of remarkable. He took TRX and kickboxing classes, renewed his lapsed love for distance cycling, and even created a miniature functional-fitness gym consisting of monkey bars and a climbing rope in the basement of his summer home in upstate New York. As a result, he lost 20 pounds while rebuilding some of the muscle mass he’d lost from his youth.

“He took it how I thought he would, which was like a soldier,” Vanessa says. “The mission and task was at hand, and he figured out how he could train for it.” 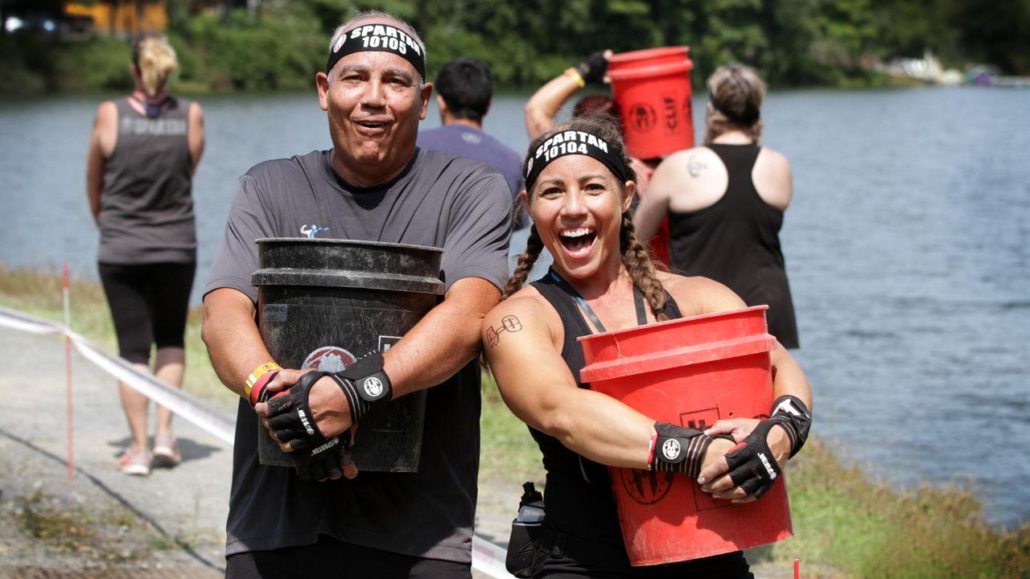 Vanessa had hoped the Spartan race would bring her closer to her father. And it did—suddenly the pair had a shared goal. For the first time, they were partners. “Over the past few months, we’ve talked more and texted more than ever before,” she says, remembering the conversations on race strategy and how to navigate various race obstacles. “I’m seeing Spartan race as kind of a glue that’s bringing us together, but on a whole other level.”

Once race day arrived, the father-daughter team set off from the starting line together. As they climbed the first wall, they paused, savoring the moment and considering how far their relationship had come over the last few months. They shared an “Aroo!” before continuing on.

There were no records broken, and it was hardly a flawless run. Is knew he’d never complete the monkey bars, and he racked up more than 100 burpees over the length of the course. But he’d prepared himself both mentally and physically for them, and he did them cheerfully.

“It was a fantastic feeling being next to her, all fired up and ready to go,” Is says. “That experience was invaluable.”

Vanessa agrees. She paced with her father the whole way. “I wanted the race to be slow, so that it would last,” she says. “I didn’t want it to end.”

“I think that brought us closer together,” adds Is.

Originally they’d planned on just running the West Point Sprint together, but the buzz was too strong. They’re already eyeing their next race, the Sprint in Fort Benning, Georgia, in April.

But for now, they have the memories of their first completed course, and a stronger relationship because of it. “That experience means so much,” Vanessa says. “I’m smiling ear to ear when I’m talking about it.”

Ready to give Spartan a try? Find your race today.

Jon Gugala is a Nashville-based writer and a former editor for Outside Magazine. His work appears in Outside, Rolling Stone, the Washington Post, Deadspin, and elsewhere. He is the former owner of an elitist runner mentality.

How Being Mostly Booze-Free Amplifies My Performance