What's a good mental mindset to go into Navy SEAL training with? Here's a good one: “The only way I’m going out of BUD/S is with an oxygen mask on my face. There’s no way else.”

Exhaustion, drowning, and psychosis are among the impediments that ultimately end a Navy SEAL tryout, but it was a math test that defeated Brad McLeod. It wasn’t even that McLeod was particularly bad at arithmetic.

“You only got four hours of sleep,” he recalls. “Before the test, they would send you out to the surf, you’d come out of the surf, and they’d make you make a sugar cookie,” which means coating your cold, salt water-soaked body in the sand.

Then he had to hustle back to the classroom and take the dive tables test against a wall, so as to avoid wetting the paper while calculating the decompression time from a 120-foot dive.

“It’s a weed-out: can you, under stress, perform a mental task?” says McLeod, who was weeded out of the 125th basic underwater demolition/Navy SEAL training program (aka BUD/S) three months after it began. “If you can’t, then you shouldn’t be in that lineup,” he says.

It was the summer of 1983, and McLeod, just a year past high school graduation, took the test a second time. He failed again.

He came in too muscular and without stamina, but still made it to the second phase of BUD/S, the dive phase. Yet his 90-day run was over. Worse, he couldn’t try out again until he served on USS Cleveland as a radioman for one year, per his Navy contract.

“That was the worst moment in my life,” McLeod says, until he set about the task of using the Cleveland’s cramped quarters to get fitter and smarter to crush BUD/S and earn SEAL status within the year. “When I figured it out,” he says, “It was the best thing that ever happened to me.”

McLeod grew up in Tallahassee, Florida, and military service ran in the family. His uncles had been in the Army and the Navy; his great-aunt served in the Navy, and his great-uncle was a paratrooper who was buried in Normandy during World War II. In high school, McLeod encountered Men in Green Faces, a novel by Gene Wentz that chronicled Wentz’s Navy SEAL deployment in the Vietnam War.

“I was spellbound,” McLeod remembers. “I was like, ‘Holy crap, these guys get to ride around in boats, hunt for bad guys in the swamps of Vietnam, they go scuba diving—I couldn’t believe it.’”

Eager to follow in the footsteps of his forefathers, McLeod talked to a Navy recruiter at his high school about joining the SEALs.

“Your chances of making it are maybe 20 percent. There’s a high chance you will not make it,” McLeod recalls the recruiter telling him.

Because of the attrition rate, McLeod signed a contract: in exchange for a shot at BUD/S and the SEALS, he agreed to serve on a Navy ship as a radioman if he didn’t make the cut.

Upon graduation, McLeod shipped out to the Navy base in San Diego. He aced the basic Navy SEAL training tests and practiced radioman duties in “A” school, gazing across the bay to Coronado Island where he watched other would-be SEALs battle the surf during their shot at BUD/S. Soon, he thought, it would be his turn.

But McLeod had been preparing for BUD/S long before he left Florida. “This was back in the late 70s,” he says. “There was no CrossFit, there was no LA Fitness. The only gyms in town were two bodybuilding gyms.”

Mirrors and flexing men in stringy tank tops were McLeod’s fitness education; he read Arnold Schwarzenegger’s Education of a Bodybuilder and got jacked on 1,000-rep sets of push-ups and sit-ups. He learned proper squatting form and pressed immense weight—attributes that, unbeknownst to him, would be next to useless at BUD/S.

“Hell week” is the most well-known portion of Navy SEAL training, but it’s only week four of the eight-week phase one of BUD/S. Not that the rest of the weeks are pleasant; the entire period is meant to test the physical and mental limits of a candidate.

“Where I really started sucking was at endurance,” McLeod says, noting that he hadn’t been running in preparation for the program. The water tests, too, were trying. “That’s what made most guys quit: the water and the sand, it’s just such an equalizer.”

On top of the cold agony of the surf, instructors would play eerie, apocalyptic music or offer the sopping wet men mugs of hot cocoa should they decide it was all too much.

McLeod survived the onslaught, but the cursed dive tables sent him packing. The day after his departure from Navy SEAL training, he vowed to return as soon as possible—stronger, faster, and smarter.

No Gym, No Problem

From the outset, McLeod’s plan to return to BUD/S kept him apart from the sailor cohort on the USS Cleveland, where he would be a radioman for a year.

“Everyone there was like, ‘What, oh, so you’re not going to be a radioman? Look how you did the first time around; how well did that go for you?’” McLeod says. “You’re a loser, man, and you’re a double loser for not buying in on the Cleveland."

He made the best out of the situation, got to work on his radio duties, and set about finding a place to train on the ship. 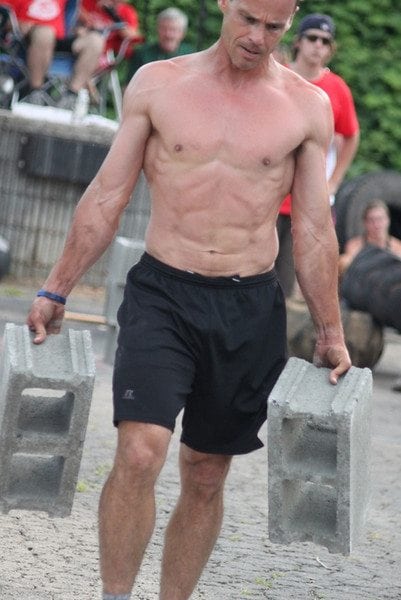 There was, technically, a weight room: some rusty equipment jammed into an area the size of two pickup trucks. It had no windows and no fan, just air piped into a metal box. Because McLeod had been through BUD/S phase one, he knew he was too bulky the first time out, and tailored his year-long regimen to bodyweight exercises that would build strength and endurance simultaneously.

He did every variant of push-ups and pull-ups he could conceive of, and the ship’s rolling motion added a balance element to his burpees. Since the BUD/S pull-up bar was two inches in diameter, McLeod wrapped a towel around the Cleveland’s bar to simulate the wide grip. He did the daily BUD/S workout five times a week, and finished with a set of pull-ups each time.

“If I could do a BUD/S workout at the drop of a hat, if I could do an hour plus of pull-ups, then I knew that’s the kind of condition I needed to be in,” he says.

He also brought along math and physics books, as well as the dive tables themselves, and studied the lot until he knew Boyle’s law backward and inside out. He left the Cleveland ready to take his second crack at the SEALs.

Walking Back Into Hell Week

Although he’d already survived the excruciating phase one, McLeod wasn’t overly confident going back in. “I saw guys who were superstar stud athletes; I was intimidated as hell my first week there,” he says. But he also knew, having seen the toll BUD/S takes firsthand, that mental fortitude would take him further than a year of training on the Cleveland. “Every time we went in the water, those A athletes would quit, because they didn’t know why they wanted to be there,” McLeod says.

McLeod passed BUD/s two years after his original enlistment and was deployed to SEAL Team 4 in Little Creek, Virginia. He served for six years, splitting his time between Virginia and Puerto Rico, where he trained other SEAL teams for deployments in Cold War hotbeds like Beirut, Nicaragua, Honduras, and El Salvador. After his discharge, McLeod became a rock climbing instructor, and he now climbs, rides mountain bikes, and does CrossFit. He still sees his initial failure at BUD/S as his life’s formative moment. “Drop me at BUD/S the second time, and that defined everything in my life about not quitting,” he says. “It became the greatest moment in my life.”

Steal McLeod’s three favorite bodyweight workouts for getting in Navy SEAL shape without a gym membership. For more of his Navy SEAL training philosophy and plans, visit SEALGrinderPT.com.

The SEALs’ preferred exercise of perpetuity is essentially an adapted burpee. You do the push-up, but before coming up, you jump your legs apart and then back together. They’re called eight-count bodybuilders because you’ll count out each of the eight motions: Hands to the ground, push-up position, push down, push up, spread legs wide, jump legs back together, jump legs underneath hips, spring back up.

Every SEAL needs to be able to crank out 20 pull-ups at the drop of a hat, but varying your grip can build strength and make it easier to hit 20 good ones. Try wide grip, narrow grip, mountain climber (hands facing opposite directions), and bicep curl-ups. For the full BUD/S experience, wrap your bar in a towel for a forearm-searing wide grip.

McLeod finished his workouts with planks on his hands, but he’d use different variants to keep progressing his core strength. Try lifting a hand, lifting a leg, or doing opposite-arm opposite-leg planks. Once you master those, hold a weight out in front of you or do a grasshopper, bringing your knee up to your opposite armpit.

Up for a high-intensity bodyweight fast-track to fitness? Download the Spartan Get Fit Fast plan. Should the Amazfit T-Rex 2 Smartwatch Be Your New Training Partner?