But consumer devices actually provide a different type of treatment called transcutaneous electrical stimulation (TENS). We asked physical therapists Michael Camp, DPT, CSCS, at Bethpage Physical Therapy and John Petrizzo, DPT, SSC, and assistant professor at Adelphi University about all things NMES and TENS to find out the truth behind shocking muscles into recovery. Read on to see what electrical stimulation can do and if it’s right for you.

“NMES uses an electric current to stimulate a strong muscular contraction. TENS is a home version with a lower level electrical current used for therapeutic purposes, mostly pain modification,” says Petrizzo. “When I’m referring to NMES, I’m talking about use in a clinical setting where it’s at a very high intensity. It’s referred to as Russian electrical stimulation, and it uses a 10-second contraction with a 50-second rest period, repeated for 10–15 minutes.”

Petrizzo says that the difference between NMES and TENS is the power capacity of the machine. Medical NMES machines made by companies like Chattanooga cost thousands of dollars, have more settings, and have a higher capacity to elicit a contraction than an at-home TENS unit. Although the marketing materials for many popular devices claim that they are NMES devices, they are actually just TENS units, designed to relieve pain. If you’ve been truly injured, you likely tore a ligament, muscle, or tendon and might even need surgery. The recovery solution will not be a consumer TENS unit, regardless of what claims the website makes. With that said, let’s take a closer look at what medical NMES can do if you’re injured. Then we’ll explore the use of NMES and TENS for sports performance. 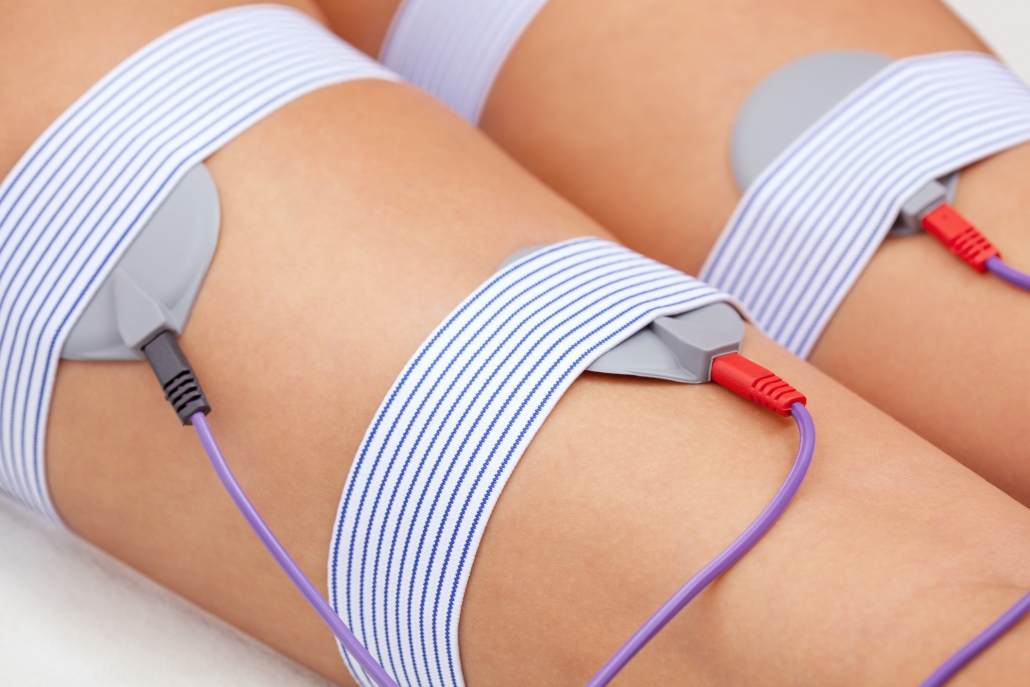 Both Petrizzo and Camp give the example of a person who has had surgery to repeat a torn anterior cruciate ligament (ACL). In this case, the patient can benefit from electrical muscle stimulation in a clinical setting because after an ACL repair, the quadriceps (thigh) muscle is often unable to contract the way it used to.

“NMES uses an electric current to stimulate or increase the capability of muscle tissue to contract by mimicking an action potential, which is the relay of information first received by an outside stimulus to a muscle tissue, then processed in the brain, and finally relayed back to the muscle tissue to elicit a response,” says Camp. “An athlete initially has trouble initiating a quadriceps contraction after ACL surgery, and using an NMES machine can help the athlete get this muscle to fire. Another setting on a NMES machine can help with recovery and reduce swelling, either after surgery or from the initial injury.”

A 2012 study in the journal Physical Therapy compared two groups who just had total knee replacement: one group received standard rehabilitation, and the other received standard rehab plus NMES applied 48 hours after the surgery, and then twice per day at the maximum tolerable intensity for 15 contractions. This study lasted 52 weeks, so any benefit would be there for a reason. It turned out that the patients who received the NMES in their quadriceps had significantly greater strength in their quads and hamstrings at three and a half weeks after the knee replacement. This improvement lasted the full year compared to regular physical therapy without NMES, and included other benefits like better range of motion.

Another unique finding is that electrical muscle stimulation can reduce the incidence of calf cramps, which are a common issue among Spartans trying to climb extremely tall mountains and then jump over walls. A 2014 PLOS One study examined cramp threshold frequency, which is the minimum electrical muscle stimulation frequency required to elicit a muscle cramp. The lower your threshold, the more likely you are to have had cramps in your life. This trial found that six weeks of NMES to the calf muscle increased the cramp threshold frequency, meaning the muscle now required a more powerful contraction in order to cramp. Although the study had a small sample size, it’s an interesting way to approach cramp prevention.

As for upper-body injuries, look no further than me. I tore my pectoralis major (chest muscle) tendon off my upper arm bone while benching pressing. The physical therapist applied NMES to the pectoralis major and biceps brachii six weeks after surgery. Camp gave his take on NMES for helping heal damaged tendons.

“Some studies do show a benefit with blood flow, but with regard to helping a tendon, I have not found any literature to show any support,” says Camp. “A tendon responds to force, so I would recommend either a strength exercise or a flexibility exercise such as dynamic stretching or static stretching depending upon your goals.”

So we know electrical muscle stimulation works for muscles recovering from injuries, but what about recovering from workouts? Well, that would be where TENS comes into play.

Look, sometimes I use an at-home TENS unit on my thighs and calves after long runs or leg strength training. So do elite CrossFitters, triathletes, and obstacle course racers. That doesn’t mean TENS has been scientifically proven to be better than other recovery methods. A 2014 Journal of Strength and Conditioning Research review of electrical stimulation (apparently incorrectly called NMES in the review) states: “Despite NMES often being commercially marketed as an effective modality for enhancing recovery from exercise, the overall findings of this review seem to provide insufficient evidence to support this. Although there seems to be good evidence to show that NMES can have a positive [blood lactate]-lowering effect . . . there is no evidence to support its use for enhancing subsequent exercise performance compared with traditional recovery methods.”

The only possible effect on workout recovery is via reduction of lactic acid, a biomarker for muscle fatigue. However, you’d need to carry a TENS unit around everywhere or go directly home after your workout to use it.

“Lactate is a byproduct of creating ATP for energy anaerobically. Once you stop exercising and that demand for ATP goes down, you stop producing lactate at a significant level, and the lactate that was built up dissipates very quickly,” says Petrizzo. “If you were going to use NMES to clear lactic acid, it would have to be applied immediately after exercise because lactate is cleared out the muscle within minutes after exercise.”

French researchers tested this theory in a 2013 Applied, Physiology, Nutrition & Metabolism study by administering different recovery methods to study participants between two yo-yo intermittent recovery tests, which are basically shuttle runs to exhaustion. People did the first shuttle run and then did 15 minutes of either passive recovery (sitting in a chair in this case), active recovery (stationary cycling), or TENS on the calves. Immediately after the first run and every three minutes during the 15-minute recovery, researchers drew blood and tested it for lactate levels, pH, and other fatigue markers. The low-frequency TENS speeded recovery from the first shuttle run by more than 14 percent compared to passive recovery. Yes, those using TENS and active recovery had less lactate and hydrogen ions (indicating blood acidity, another biomarker for fatigue) than passive recovery. This finding can useful for sports where there is a halftime or for instances where a Spartan takes a short break between “laps” of a course. (Hint: at the Ultra Beast drop zone.)

Aside from being timed perfectly for post-workout recovery, TENS units are also known to relieve pain. Here’s how that works.

A TENS unit stimulates the sensory nerve endings that affect pain receptors and causes the brain to close the “gates” to painful input, according to Camp. Although many consumer devices may not use the proper wording, Petrizzo says that most home-use units try to elicit two different types of responses: an acupuncture-type setting and the gate theory response. Low back pain, ankle pain, or knee pain from osteoarthritis are examples of reasons people use TENS units.

“The gate theory describes how a non-painful stimulus can distract us from painful stimuli,” says Petrizzo. “Creams like Bengay create a topical sensory stimulation that distracts you from your pain, which is the same mechanism the TENS unit uses. The acupuncture-like setting creates smaller, lower-level muscular contractions which release endorphins that help you manage pain for short periods of time.”

No article about TENS would be complete without mentioning the placebo effect. A 2012 Physical Therapy study found that a placebo electrical stimulation device decreased pain at rest and during functional activity to a similar extent as low- and high-frequency TENS. The study subjects had knee osteoarthritis, but still the research proves the placebo effect is real.

“The success rate of TENS units has a lot to do with people’s expectations about whether it’s going to work for them,” Petrizzo says. “TENS is in line with other passive treatments like ice, heat, massage, and ultrasound.”

The final element to explore here is the effect of TENS on sports performance. Spoiler alert: it’s not much. 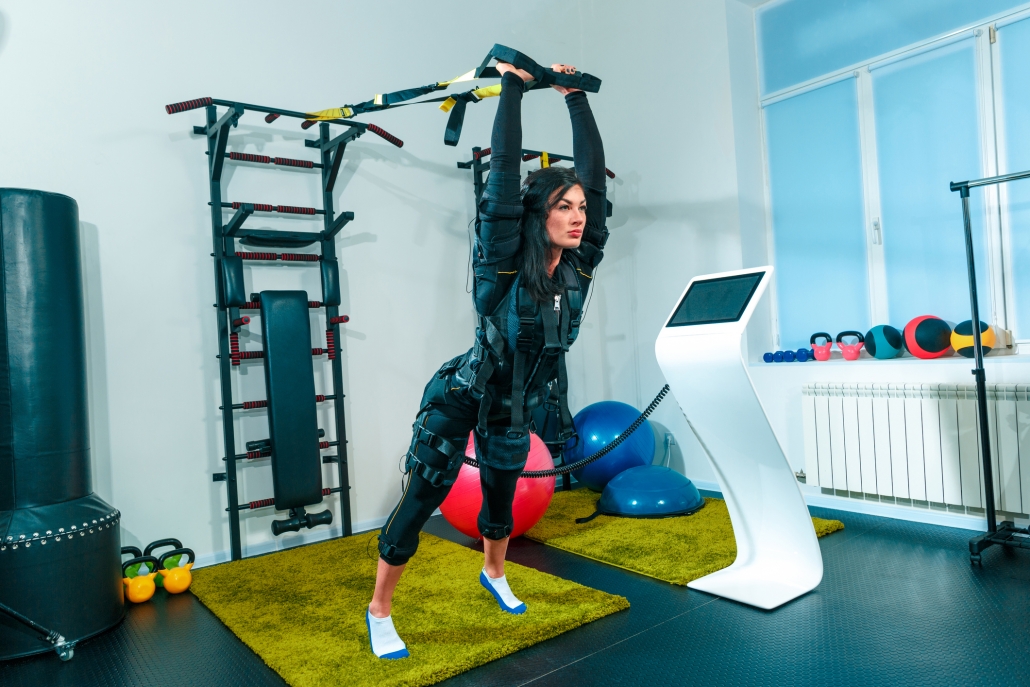 Getting better at running, weightlifting, obstacle course races, and several other sports requires better function and increased size of muscle fibers. Some advanced at-home TENS units have a “muscular endurance” or “fast-twitch muscle” setting that supposedly helps recruit muscle fibers to get them ready for endurance or explosive sports, respectively. In fact, a look at social media will show you people using wireless stimulating pods while exercising.

“Research has shown that the use of electrical muscle stimulation together with exercise has an impact on performance,” Camp says. “An example is doing a squatting exercise with the pads set up on the athlete’s quadriceps as they perform the movement.”

Camp adds that certain NMES machines have been developed for greater stimulation of muscle fibers without increasing weight workloads, which can be a safer way to improve performance and reduce the chance of injury. Now that’s something I have never experimented with: using a machine instead of exercise to make gains. This is why experts like Camp work with elite athletes.

The end of the electrical muscle stimulation rabbit hole is that active recovery, such as going for a walk or riding a stationary bike, is superior to any passive recovery, including TENS. “I don’t think anyone has found that NMES or TENS would do a better job at bringing blood to an area than your body would do with some light exercise,” says Petrizzo. “I’d recommend people check with their physician if they were going to purchase one of the stronger at-home TENS units.” The bottom line is that a home TENS unit has very specific uses: pain relief or recovery right after exercise. It’s a tool that can be useful but shouldn’t be relied on for results.

These Are the 5 Most Effective Strength-Building Techniques

This Is the Best Way to Train, According to 5 Master Coaches