With our Spartan Spirit Awards, we celebrate people who embody the key Spartan values of grit, determination, and perseverance. Dana Christopher started OCR at age 51, and seven years later, he is still shaving off time (if not his beard).

“I see myself doing this for a long while. Spartan is just like life: if you keep on going and push through obstacles, things get better.” — Dana Christopher

In anticipation of his 51st birthday, Dana Christopher’s brother challenged him to do a Spartan race. This Spartan Sprint, back in 2013, changed Christopher’s life, and since then he has conquered 111 OCRs, 39 of which have been Spartan Races. He’s a beloved and recognizable figure in the OCR community, because of his dramatic white beard and his “can do” attitude. Falling off a 30-foot ladder at work in October 2018 slowed him down for a while, but it didn’t stop him. He’s done nine OCRs, three of them Spartan Races, since that accident. At the age of 57, Dana Christopher is still improving his performance in Spartan Races. It’s our pleasure to award this warrior of positivity with the Spartan Spirit Award. 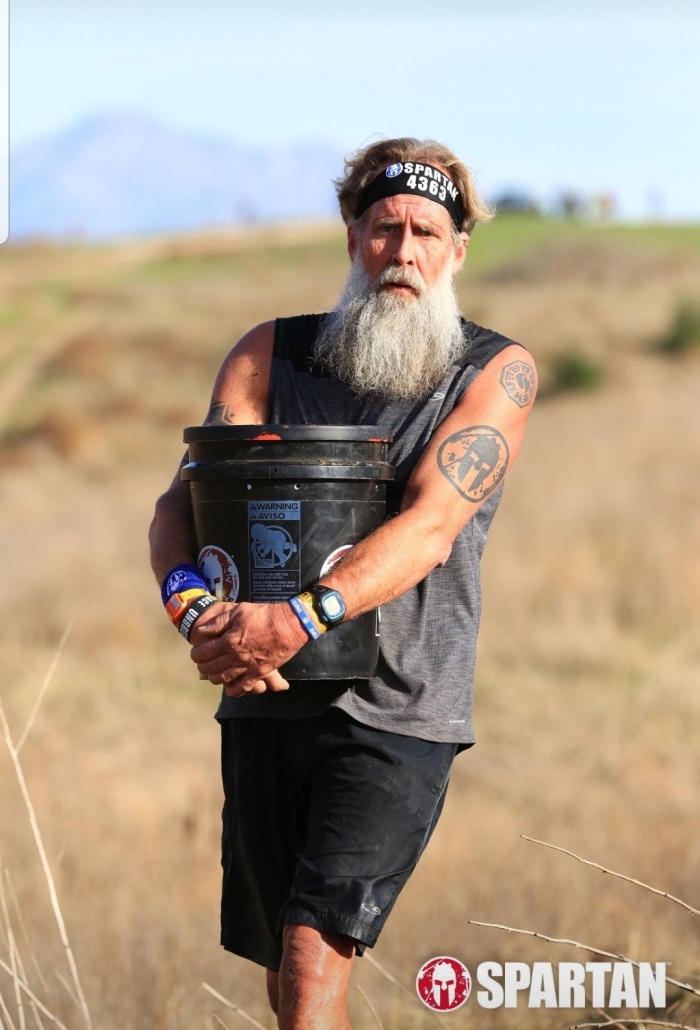 SPARTAN RACE: How did you come to Spartan Racing?

DANA CHRISTOPHER: My brother, Dave Honeycutt, got me into it. He came up here to Oregon on Memorial Day of 2013 and said “Do a Spartan Race with me for your birthday.” I was sort of in a funk at that time. I had never heard of Spartan. I am not a big runner and I had never done an obstacle course race, but I thought, “Hey, I am 50 years old, but I’m not dead.” I decided to go for it. I had two months to train for what was then called the PacWest Sprint in Washougal, WA. I joined a gym, started lifting weights and running. I’m active in my work, which is construction—climbing up ladders to install windows—so that prepared me. My brother had his head shaved, and I told him I was going to shave my head for the race in solidarity.

SR: Did you shave your head?

DC: No! I grew out my hair and my beard in anticipation of shaving it all off for the race but when my brother got off the plane and saw me he said, “Hey, you didn’t shave your head!” That beard felt right. . .Now people know me from the beard. I believe that if I shaved it off, I’d be like Samson and I’d lose my strength!

SR: How was that first race experience?

DC: My brother and I were out on that course for almost 3 hours! Now, I can do a Spartan Sprint in less than an hour, but it was unbelievably difficult that first time. Halfway up the first steep hill, we were both walking!  But you see, the obstacles got me hooked. With Spartan, you have to do 30 burpees if you fail an obstacle, and I failed many. It drove me nuts. I could not accept failure or more burpees, so I went home to train. That first time, I failed what was then called the “Javelin Throw,” so I got a hay bale in my backyard and threw the javelin over and over. I rarely fail that obstacle now.

Climbing Back After a Fall 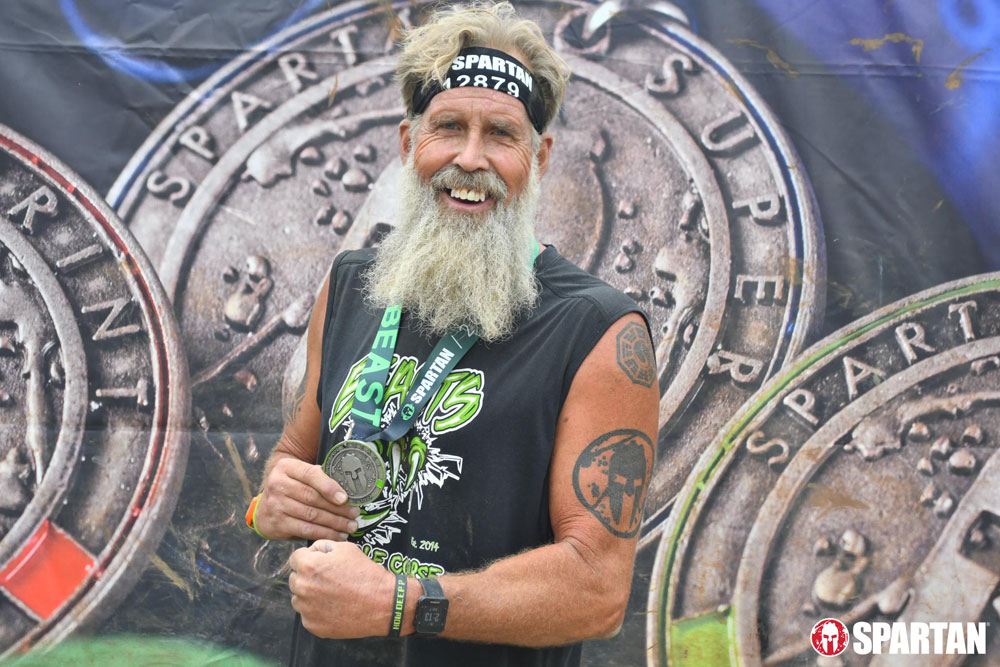 DC: I was having an amazing race year in 2018. I did the Tahoe Beast in 2018 with no failed obstacles and my best time. On my birthday, I did my 100th OCR, at the Washougal Sprint, and my daughter gave me a plaque at the finish line that said, “Age is Just a Number.”  But in October of 2018, I fell off a 30-foot ladder at work. I had surgery six months later to fix stuff up because though I broke no bones, it turns out I had sustained internal injuries. It was hard getting back to training but I did it. At my first race back, the Seattle Super in April, 2019, I failed six obstacles, a ton for me, but there is a beauty in doing burpees. It means you’re not giving up. I accepted my failures and continued to set goals and work hard. That’s why I love Spartan: It pushes me. I even have a Spartan tattoo. Aroo!

SR: What are your goals within Spartan?

DC: My next Spartan race is the Seattle Super on April 4th. I am getting nervous about The Olympus because they are changing up that obstacle and it could be a real challenge. I like the fact that I’m nervous. Spartan is the only one of the OCR programs that makes me feel this way. They never let you rest on your laurels.

SR: What’s your advice for someone who feels too old to try a Spartan Race?

DC: Do it if you want to. Have fun. Be smart and take care of your body. If you can’t do something, do the burpees and build your strength until you can. With practice, you can do anything you want to do.