Author Brian Chontosh is host of the new podcast, Spartan Stand. Performance on Demand is the focus of his first episode:

Some years ago I found myself in Patagonia on an expedition length adventure race. It was late summer in a two-season environment. I was a member of a four-person coed team with considerable experience and plenty of capacity. It was day six or seven (continuous days) out of a scheduled ten and nearly 500 miles. We had just dropped into a massive ravine on a 200 foot-plus night rappel. It was a one-way entrance. The landing wasn’t visible and what we thought was solid footing was actually thick moss among tree branches. We had to make a waypoint some 30 miles off that would serve as a steering marker to guide us who knows where through a passage of the Darwin Range. The route had been scouted only via helicopter.

After cliffing out in the early morning hours of darkness and exhausted, both physically and emotionally, we straddled boulders to avoid sliding down the scree. We napped. Well before sunrise, uncontrollable shivering woke us to inches of snow melting on our bodies.

Long story short, a teammate became delirious and unable to function due to hunger, fatigue, and illness. The emergency GPS had no signal and our contingency satellite phone proved there was nothing in orbit at that latitude to connect with. We had less than one day of supply to ration across four people for however unknown long. We weren’t going over the mountain range now and had no map chip for off-course areas. It was primitive, remote backcountry.

The scenario went from an expedition length adventure race to survival over the stretch of a few short, small events. Next, our training would be legitimately leveraged for a true test; absent any convenient failsafe or comfort blanket.

This is a vivid example of what I refer to as Performance on Demand.

It never fails to amaze me how people routinely conflate training and testing. Then, to top it off, their attitude toward being tested is magnificently flawed. Although they might understand the difference between the two and have an ability to articulate definitions or describe their concepts as events, a lot of people struggle (if not out right fail) at being able to consistently identify with the processes in their everyday lives. There is a major disconnect - whether out of convenience, ignorance, entitlement, laziness or whatever society has tended to reinforce and normalize. I submit that it can all be summed up as having low standards towards excellence.

Let’s reconcile the terribly socialized behavior towards testing. More often than not, individuals approach a test with an expectation to have ample opportunity for deliberate “study time”. This mindset opens up the door to drift from a life of preparedness and puts emphasis on “the test” as a holy grail of sorts that suggests achievement or success. Someone half heartedly moves through daily motions until a specific time domain preceding a test where they will then devote themselves to study. It would seem that the certificate, medal, title, or other awarded gadget for passing becomes the object of desire. This is entirely lame; the accomplishment becomes for others to observe and applaud. I might even suggest that what comes after the test for many is a data dump or another drift - from maintaining competence to looking for the next shiny object to pass and show others.

Tests evaluate, at any given moment, how developed your capacities are. This can be mental, emotional, spiritual, physical, and even moral. It is incredibly irritating when someone whines about not being given well enough notice that a test is coming. Or even worse, griping that they haven’t been told what’s going to be on the test so they can best prepare for only the minimum required information. Or afterward, bitching that they weren’t told a certain item was going to be tested. They continue to then suggest something was not fair. Why? They are focused on the pedestrian aspect of passing. How many times have you heard “How many can I get wrong?”

Personally, I go out of my way to suggest that someone who maintains this position is a charlatan, underachiever, or lazy bitch. What they are saying is, “I’m not interested in putting forth the effort to live every day to the fullest or uphold my responsibilities in earnest; I just want to know when someone is looking so I can turn on my sauce. I want to rest easy, and when I sniff that something is coming I’ll prepare.” Where I’m from we call those people losers. Bare minimalists stuck with a primary school mentality. Hey loser, graduate or get accustomed to being mediocre.

High achievers are mildly interested in knowing when they will be tested or even what is on a test. They live a life oriented from a position of being prepared and partisan towards acceptance; acceptance not being the same as satisfied. Winners lead a daily life of discipline that constantly seeks personal and professional development while being keenly self-aware. Some of the best can acutely forecast moments of challenge because they are connected to their surroundings, constantly engaged with progress, and have an appetite for excellence. Oftentimes they even put themselves into circumstances where being tested is invited. They pursue curious challenges in order to test themselves because they are dominating across most normal domains.

I submit to you Performance on Demand. Critical challenges rarely come with adequate forewarning. Performance on Demand is the act of producing results PERIOD. Right here, right now. No questions asked. No excuses offered. No cute rationalizations for any measure, or lack thereof, indicating accomplishment or failure.

Performance on Demand is less than zero percent interested in what you could have done three years ago. It is equally unimpassioned with what you might have accomplished if only if, or what you could do absent any current number of oochies or owies, or even three weeks from now when you’ll have had the opportunity to focus train. Performance on Demand simply insists on what you are capable of in the moment. What is your capacity NOW. Do you think the lion gives two fucks about the gazelle being a little tired and having a limp today? Do you think the fish is telling the fisherman that he cheated because it wasn’t announced that Pop’s lucky spinner bait was in play? People like to introduce fairness into the performance and testing conversation to distract us from a lack of capability and shitty execution.

In the Corps I needed to have an intimate appreciation of the current capacities of the Men, the Unit as a whole, and every combination of Team in between. We didn’t have the luxury during Operation Iraqi Freedom or Al Fajr Fallujah to ask the enemy what was going to be on any test they might mettle against us. We had to simply perform when challenged. Not only perform, but perform magnificently, as the consequences could be ultimate. I needed to formulate plans that would be supported by appropriate capability and employ the men in certain fashions that were consistent with their right here, right now competence. In order to appreciate these facets, we were always training, always evaluating, and ever accelerating toward advancement. We adopted and accepted a mentality of Performance on Demand.

When I am tested, I eagerly await the results, but not to hear whether I passed or failed. I already have a sense of how I did and waste very little energy worrying about some result that will be what it will be. What I get most excited about is having areas of opportunity for improvement identified. If I answered question 4 wrong, awesome: it provides an azimuth to pursue for development. If I got question 7 right, so what, no kidding.

Then, of course, it’s always nice to register for an event that is relatively known and knowable to read the temperature of our progress and identify directions for advancement. Spartan events are tests. So are all the adventurous endeavors I register for or simply create for myself. They are incredible opportunities to display prowess and identify accomplishment against challenge. Mental fortitude comes under assault, and performance metrics are measured against a continuum with infinite upper limit. (I deliberately refused to suggest a continuum for measuring against others.)

Unlike standings and rankings that compare you to how well someone else prepared, was more lucky, or had better capacity, the mental fortitude continuum is scaled in different increments that are unique to each individual. Like a fingerprint. It is solely calibrated based off the sets of experiences we’ve had and shared and relevant only to the efforts we put forth. So too is the measure of what is extreme to you versus me or anyone else. *

When you adopt this view of testing and commit to challenge, you gain a tremendously valuable sense of self-appreciation that will limit any ability to bullshit yourself one way or another. You will experience what you experience, and your degree of success will be directly related to your capacity. It is much like Nature: she doesn’t care about excuses or performance caveats and is indifferent to your feelings and success. You simply perform or you do not—are you eating today or being eaten.

What if we altered our perceptions regarding testing and the challenges we face in life? If we looked at our lives as a process of accruing experiences in the event we are tested without warning? How well-prepared we are to win becomes inextricably tied to how well we live with an appetite for excellence in everything we do: dealing with others, taking care of our family, taking out the trash, brushing our teeth, work, play…these are the reasons to embrace performance on demand.

(It is important that we hold organized sport and competition as a special category apart from this conversation. Not because it doesn’t share similar veins, but there are different aggravating interests that alter the conversation. Bottom Line: in organized sport, you compete to win. For some that is first overall, for others, it’s top 10, and for others yet it means simply setting a PR or even finishing. Have you ever asked someone why they are racing and had them say, “Well, I don’t care if I quit. I’m just here for the community and free hotdogs”? Pfft.) 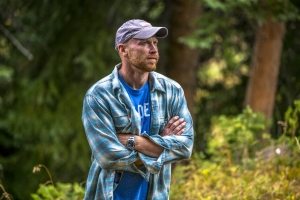 Brian “tosh” Chontosh is a retired USMC Infantry Officer who lives in Boulder, Colorado. He founded Crooked Butterfly Ranch, an experiential leadership company that leverages nature to create opportunities for individuals and organizations to challenge their ethos, values, and philosophies regarding life and leadership. He is also an active outdoor enthusiast and adventure racer having completed ultra-endurance events like the Arrowhead 135, Moab 240, Primal Quest, GodZone Adventure Race, the AR World Championships XPD, and others. For more info, visit https://en.wikipedia.org/wiki/Brian_Chontosh and http://www.crookedbutterfly.com.

Brian “Tosh” Chontosh is a retired USMC Infantry Officer who lives in Boulder, Colorado. Follow him on Instagram: @tosh.crookedbutterfly. For more info, visit https://en.wikipedia.org/wiki/Brian_Chontosh and http://www.crookedbutterfly.com.