Sponsored by Shriners Hospital for Children

Jennifer Hill had grown used to people telling her what her son would never be able to do. Abram Hill, now 10, suffered spinal cord damage due to a neurological disorder when he was an infant, and is partially paralyzed as a result. But the 38-year-old mom of two from northeastern Nevada has now grown equally accustomed to watching her son prove those people wrong.

Doctors said Abram would never walk and likely never talk—today he not only does both, but also accomplishes physical feats many kids his age wouldn’t dream of: hiking, rock climbing, and slogging through the mud in Spartan races.

One night when Abram was just eight months old, Jennifer lived out a parent’s worst nightmares. Her baby was perfectly healthy when she put him in bed, but the next morning when he woke, he was completely paralyzed. The diagnosis was transverse myelitis, an inflammation of the spinal cord resulting in near-total paralysis. Doctors told Jennifer that they didn’t believe her son would ever be able to walk or even speak because of the severity of the damage.

Fortunately, within two years of the diagnosis, Abram proved them wrong. First, he regained movement in his hand. “From there on, I was just happy with any progress he made,” Jennifer says. Abram has been walking for several years now, with the help of forearm crutches, though he occasionally uses a wheelchair.

Since the Hill family moved from Idaho to Nevada, Abram has been a regular at the Northern California branch of Shriners Hospitals for Children, which treats kids with orthopedic conditions, burns, spinal cord injuries and cleft lip and palate, in locations throughout the United States, as well as in Canada and Mexico, regardless of their ability to pay for care. But Abram already had several races under his belt by the time the family learned about #TeamNoLimits and Shriners’ partnership with Spartan at a race in Tahoe.

Since 2018, Shriners Hospitals and the Spartan Kids Foundation have teamed up to raise funds to treat Shriners patients as well as help children in rehabilitation programs conquer their physical obstacles. More than 100 Shriners patients have become Spartans, running on #TeamNoLimits, with several now preparing for the Central Florida race on December 8. (Spartan participants can race on behalf of #TeamNoLimits. You can donate or fundraise on behalf of a team or a specific athlete here.)

Abram Hill: Racing to the Rescue

The Hills spent a good amount of time doing outdoor activities as a family, and Jennifer always encouraged her son to participate. “We ride motorcycles, we go rock climbing, camping, hiking, you name it,” she says. “We’ve tried to show people that you can do anything you want to do, even if you have to do it differently. “

Last year, Jennifer, who had been looking for motivation to lose weight and adopt al healthier lifestyle, got interested in obstacle races. Living in Elko, a small city in rural Nevada, she was used to having to travel a distance for most anything, but found a Spartan race in nearby Laughlin, an easy day trip. “What attracted us to Spartan is that they had kids’ races,” she says. “It was huge for us as a family to be able to do it together.” The only problem was, Abram wasn’t interested. “The day before the race, I talked him into signing up,” Jennifer says. “He had an absolute blast.” The atmosphere was fun and people were really encouraging. It wasn’t long before Abram had his first trifecta. 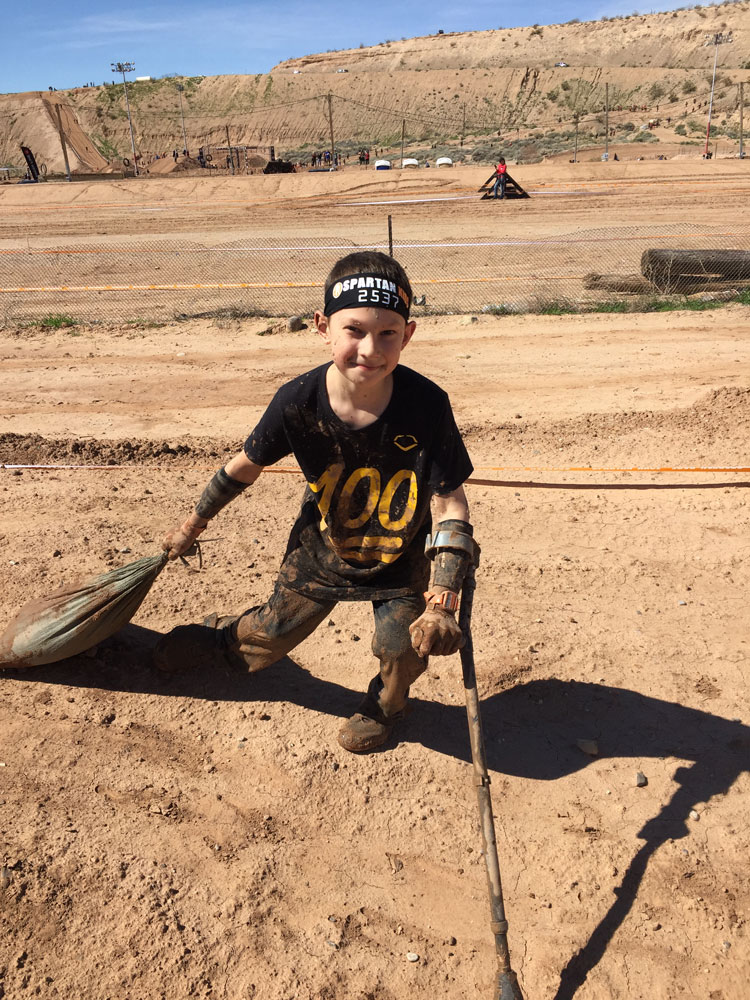 Of the six races Abram has completed, not one has been a paralympics event. He will run his first this month, in Laughlin. Of course, due to his condition, Abram does struggle with parts of the course. Because he can’t use his legs, he can’t swim so he has to be extra cautious around water obstacles, says Jennifer. Despite that fact, she makes a big effort not to assist her son. “I run with him, and I will never leave him behind, but everything he does in a race is done by him,” she says, mud and all.

“As parents, we want to protect our kids from everything,” she says. “But they can’t get the opportunity to live their lives the way they want to if they don’t have the chance to fail.” Giving her son that opportunity, to fail repeatedly and eventually, to overcome his obstacles, has not only helped Abram, but also inspired other children in similar situations. At one race, there was another child in a wheelchair. When Jennifer went over to talk with the family, she discovered they were there because they had seen Abram race. “That’s a huge part of why we do everything we do,” she says. “People see Abram and see that they could do what he does.”

It’s also one of the things Abram loves best about racing. “Obviously, he loves mud,” his mom says. “But his favorite is being on the course and encouraging the other kids at the end of the race.” 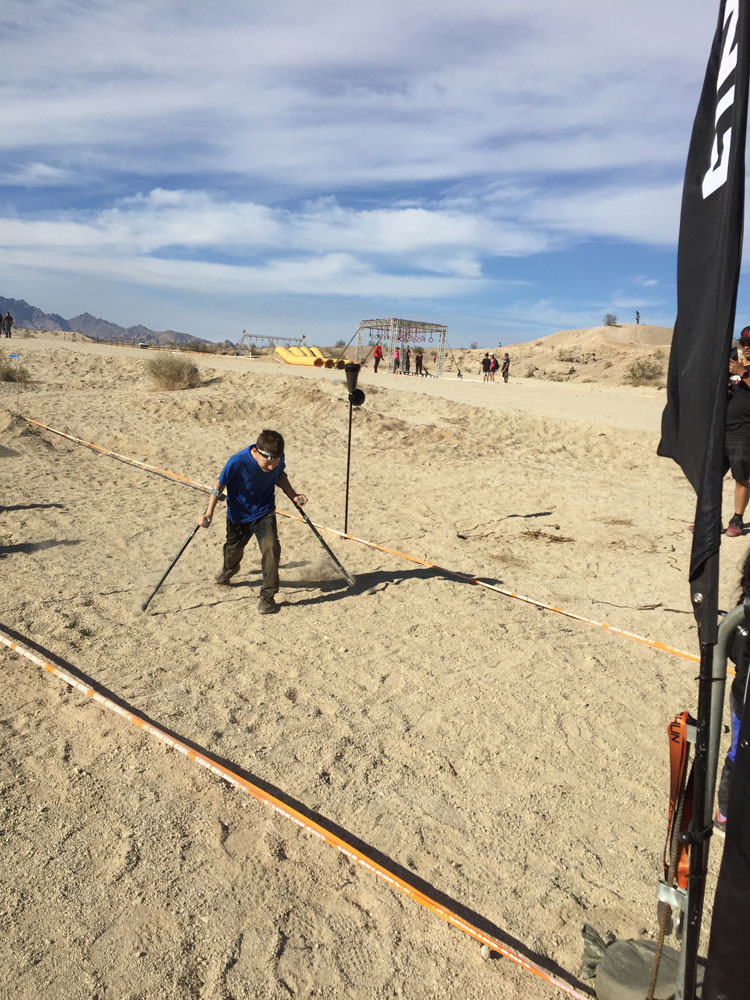 As Abram gets older, he struggles with his physical limitations. “In recent years, it has become more apparent that he can’t always do the same things as other kids,” Jennifer says. When his classmates are talking about their soccer game, he can show off his Spartan medals.

And seeing that isn’t just good for Abram and the Hill family, although Jennifer and her husband are both on track to earn double trifectas this year, and their 12-year-old daughter runs as well. Jennifer firmly believes it’s necessary for everyone watching. “People like us who don’t have a disability, we need to see that people can do anything.”

Click here to donate to Shriners Hospitals for Children