Back in 2019, we launched the Spartan Spirit Awards, celebrating the people who truly embody the key Spartan values: grit, determination, and perseverance. One of this month’s Spirit Award winners is Joe “The Tortoise” Forney, who completed his 300th Spartan race at the Seattle Beast and Sprint in September. We documented his remarkable achievement in Seattle, and Spartan World Champion Robert Killian presented him with a Harley Davidson bike at the North Lake Tahoe World Championship later that month. His story personifies what it means to be a Spartan.

It’s fitting that Joe Forney, a 63-year-old firebrand from San Jose, came to North Lake Tahoe in September 2019 as “Mr. 300,” as he’s come to be known. Two years ago in North Lake Tahoe, Spartan CEO and founder Joe De Sena challenged Forney to complete 300 Spartan races. (At the time, he had 141 races under his belt.) Forney, not one to turn down a challenge, embraced it head-on and, in the next 24 months completed 159 races to become Spartan’s first 300-race man.

So how, in just six years, did “The Tortoise” reach that unfathomable number? When he goes to a race, he doesn’t just participate; he dominates entire weekends. Forney earned seven Trifectas in his first year as a Spartan, 15 in his second, 14 in his third, eight in his fourth, 11 in his fifth, and five thus far in 2019 for a total of 60. You read that right: 60 Trifectas. 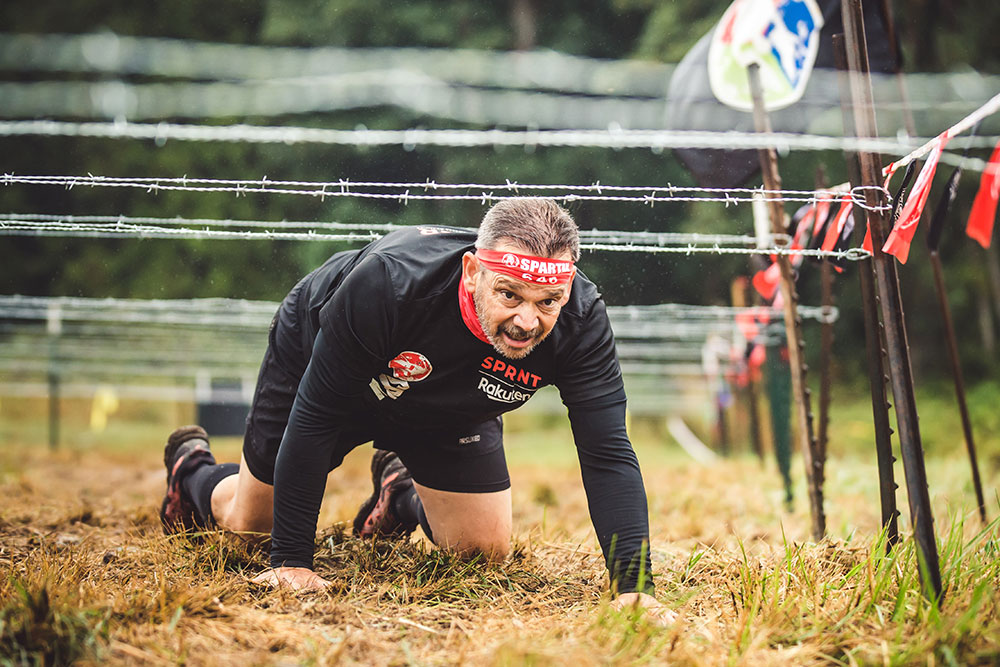 You don’t become Mr. 300 without a few wild weekends of racing. Here are a few of his most memorable stories, as well as some eye-opening statistics:

RELATED: The Landis Family Found the Strength to Persevere Through Grief

We caught up with Forney — he’s not hard to find; just go to a Spartan race — and asked him about his quest to 300, his favorite courses in America, his future goals, and more.

Spartan: How did you first get into Spartan racing? What led Mr. 300 to do No. 1? Joe Forney: In my 30s I got lazy. Work, family, and life gets in the way if you let it, and I did. I was pushing nearly 300 pounds for a while and decided one day to get back at it. I lost over 100 pounds and actually got down to 183, and discovered that I felt younger again. I thought I was old, but I was really just heavy! Around that time I saw an ad for OCR at the Rose Bowl and I entered it, just for fun. I didn’t do well in the race, but I met Hunter McIntyre. He won and loved it. He encouraged me to do a Spartan.

Spartan: You’ve done just about every Beast and Super race in the country? Which venues are your favorite? JF: My favorite, in no order, are Montana, Hawaii, Killington, Breckenridge, and Tahoe because they are both beautiful and tough. But I would have to say that my best race was when it took 10 hours and 59 minutes to complete a Beast in Monterey. It took so long because I was on a team — we called ourselves Team Avengers — that guided and assisted a group of 12 physically challenged athletes.

Spartan: What is the response like from your friends and family? How have they reacted to your prolific schedule? JF: Most people cannot believe that I can keep going. Of course they think I’m crazy — and they’re not really that wrong — but if more of them joined in the Spartan fun, they would understand. And, of course, most of my current friends and family are fellow Spartans now.

Spartan: What happened on the day you reached 300? How did it feel, and how were you honored? JF: Everyone was encouraging me and congratulating me and calling me Mr. 300. It was really nice to see how happy people were for me. I took extra time to make sure all my penalty burpees were in excellent form. Lots of the volunteers at the obstacles wanted me to stop and take selfies with them, and they cheered when I made a spear throw blindfolded. With all of that distraction and extra time on the course, I actually still took second in my age group.

Spartan: What is your long-term goal for the future? How long do you plan on doing this? Is 400 on the radar? 500? JF:  I would be thrilled to get 400 and then 500. Wouldn’t 1,000 be cool? I want “older” Spartans to join the ranks and I want to show them that we can do this! It would also be awesome to achieve 100 lifetime Trifectas. At this point, I would like to have at least as many Trifectas as my age. I will have more than my age at the end of the year, but when I have 80, I better have 80-plus!

Want to get inspired? Sign up for a Spartan Race TODAY and change your life forever.