Our Spartan Love series continues with the story of Samantha and Michael (a.k.a. Mickey), as told by Samantha (a.k.a. Sammy Jo):

My husband and I met at the Spartan World Championship Race in Tahoe in 2016. I was in route of trudging up the grueling half-mile bucket carry, trying to remind myself to stay positive and keep moving forward. I had to take breaks a couple times on my way up the mountain and during one of my breaks I looked to the opposite side of the obstacle to spot a handsome blue-eyed man I thought looked like Justin Timberlake.

He smiled and then we both went on our merry ways to finish the race.

A couple hours after finally completing the soul-crushing race and moseying around the festival area attempting to get warm, my friend and I proceeded to leave the venue. Upon exiting the area I saw a half-naked, chiseled man walking up from afar. I instantly noticed it was the same man I decided to hit on during the bucket carry. My tummy fluttered with excitement and I nudged my girlfriend telling her my ballsy comment that I said to him, but she completely agreed with me and suggested we ask for his picture.

Tired and with no shame I yelled at him and said "Hey, Justin Timberlake's brother! Do you mind if we take a picture with you?" He smiled and said "Of course!"

The stipulation he said was that we had to exchange Instagrams. I was fine with the deal. We took the picture, exchanged instagrams and left to our respective hotels to recover.

As a woman, of course, I had to "background check" his profile on Instagram. His profile picture was him with an African American woman. He had videos of himself and a "mixed" child which I wasn't sure if it was his son or a family friend. My brain jumped to a couple of conclusions, but I held onto the hope that he wouldn't give me his info if he was in a relationship.

After much research and debate I decided to post the photo we took and hash tagged "hotdamn and Justintimberlake." He responded to the photo with a cover-eyed monkey emoji. It was then that I decided to "hit him up in the DM." 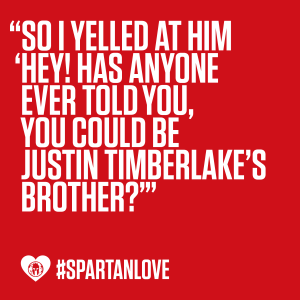 We started chatting through instagram and were connecting on so many topics and ideas that it felt like we had known each other for years even though we had only chatted for two weeks through Instagram. The incredible part was we lived about two hours from each other and decided that if we meshed this good through typing we had to see if fireworks were there if we meet in person. So we planned a date to meet halfway at the beach for some coffee and a delicious brunch that he prepared and packed for us. Not only was he humble, handsome and a Spartan, he cooked all his food and made waffles from scratch! Don't worry, of course I asked him about the little boy and the girl in the profile picture which I found out was his sister's kid that he would babysit for and the girl was one of his good friends.

Don't ever assume anything!

We spent all day together talking, working out on the beach and enjoying the sunshine from the morning til night. We were inseparable from there on. Two months later we ran our first Spartan Race together with his parents and friends while encouraging and helping people along the way.

After enjoying our first race together, two months after that we made the decision to open a gym. In July of 2017, 9 months after meeting, we opened our first OCR gym called “Just Go Lift." This enables us to share our passion with the community around us. A little over one year after meeting at Spartan World's we officially tied the knot on 11/11/2017. We now continue to run races as a team and lift the community up to help everyone become the best version of themselves.

Commit together. Then finish together. Maybe even open a gym.  Get 2 for 1 Races.