Parenting is life’s Spartan race: There are obstacles that seem insurmountable, messes to navigate, utter exhaustion, and more than a few tears—not all of them from Spartan kids, either. Getting through it requires resilience and determination, both physical and mental. But the rush when you realize you’re succeeding? Incomparable.

Success in this realm isn’t measured in medals, of course, but any mom or dad can tell you about the moments they count as a win, times when their kids stepped up in ways that surprised even them. If you’re not careful though, modern parenting can get in the way of those moments.

“Parents are stepping in more and more and preventing the experiences that build resilience, the ability to keep going in the face of adversity,” says Lynn Lyons, LICSW, a psychotherapist, speaker, and author in Concord, New Hampshire. “They want to protect their kids from feeling uncomfortable or uncertain or afraid, but that is part of learning to be resilient.”

So is failure, she says. That word may be one of the scariest in a parent’s vocabulary, but when kids don’t fail, they don’t learn. No one would ever learn to walk if they didn’t fall a few times. Instead of sheltering your kids from possible defeat, Lyons says, “Encourage them to go out of their comfort zone, and, if they fail, talk to them about it.” Set their expectations upfront: This activity could be challenging, or you might not get a role in the school play. But that’s okay, you can keep trying and get better.

Spartan Races are a training ground for these life lessons for Spartan Kids, so it may not be surprising that research has found a connection between the development of physical and emotional resilience. “Physical activity and engagement is a predictor of emotional resilience, I think probably because it’s that same process of pushing through difficulty,” says Lyons. By encouraging kids in this way, you can build their determination.

Finally, don’t forget the importance of modeling how to deal with setbacks yourself. “Show your own resiliency and they will pick up on that,” Lyons says. Here, 10 parents share the moments they realized just how much grit their Spartan kids possess.

“Zoey has been running Spartan races since she was 6, but Aspen was her first two-miler. The obstacles were harder and the altitude made everything more difficult. She was at the Hercules Hoist and broke down crying, telling her dad she wasn’t strong enough. After encouragement from him, her inner beast came out. She pushed past her exhaustion and finished the race, doing every obstacle. For the first time, she did something she truly believed she couldn’t do rather than giving up. As parents, we hope our kids get this determination in the face of hardships because they’ll need it over and over again in life.” 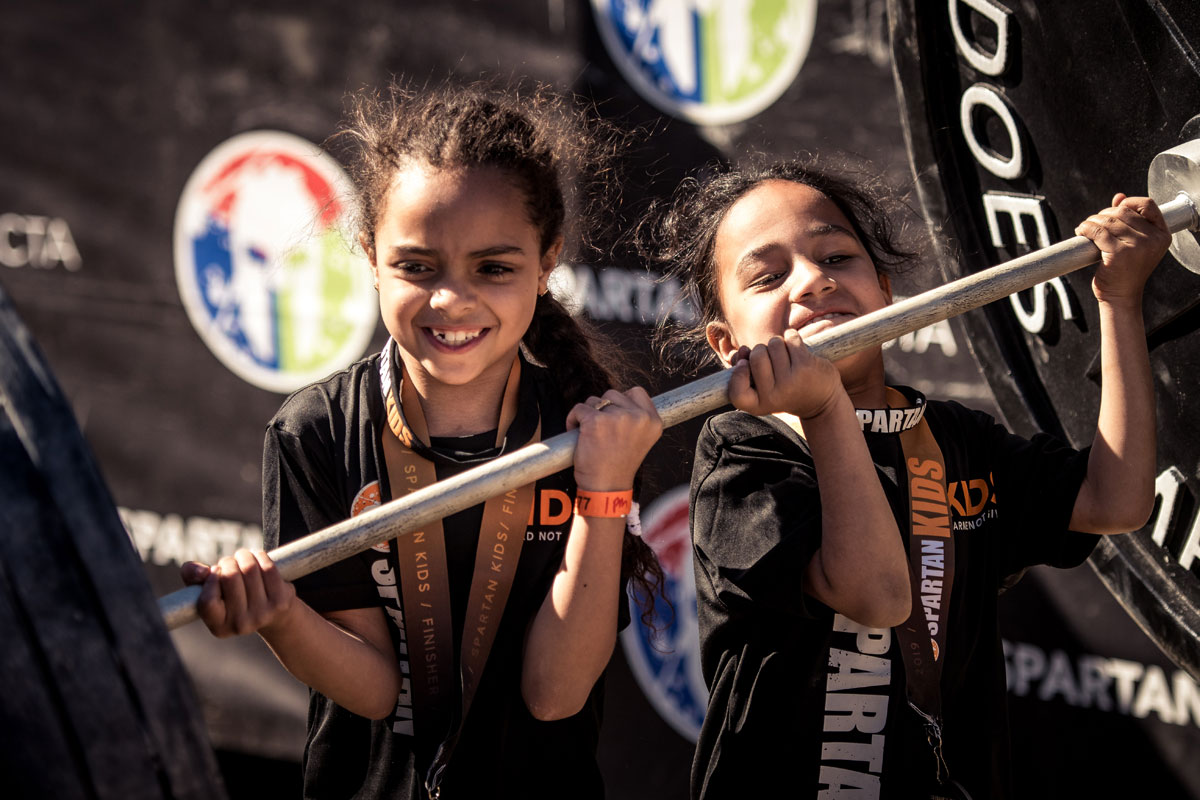 “My son is autistic and has struggled through all things from school to bullies. He recently went to the gym with me and asked to throw the spear. He made a perfect shot. He threw it several more times, hitting the target each time. This gave him the confidence to do an OCR. He completed his first two weeks later and has a newfound confidence, on and off the course. He even stood up to a bully who has not bothered him since. Brady is a true warrior!”

Related: These Preschools Prove That Kids Are Tougher Than We Think

3. Blasting Through Mud (and Fear) to Finish Strong

“My husband got into racing a year ago and the older of our two daughters wanted to join him. Olivia was timid, and racing has given her confidence. At her first Spartan, my daughter, who hates mud, was crying because everyone passed her, but she pushed through on her own and even passed a few kids to finish. Nothing like a 5-year-old to show you how to push through the hard stuff and finish strong!”

4. Braving Nerves to Get to the Starting Line

“I will never forget my son Lux at his first starting line at Castaic Lake. He was so determined. He stared straight ahead and his fists were clenched and slamming toward the ground with every cheer. He was all in. He wanted to win that race. The kid was there to compete. His twin sister Olive couldn’t have been more different. She was content on the sidelines, and I always supported her decision and never pushed her. Then at this year’s Anaheim Stadion Spartan Race at Angel Stadium, as all the kids are lining up, she turned to me and said, ‘I want to race. I’m feeling brave.’ Both were proud-mom moments.” 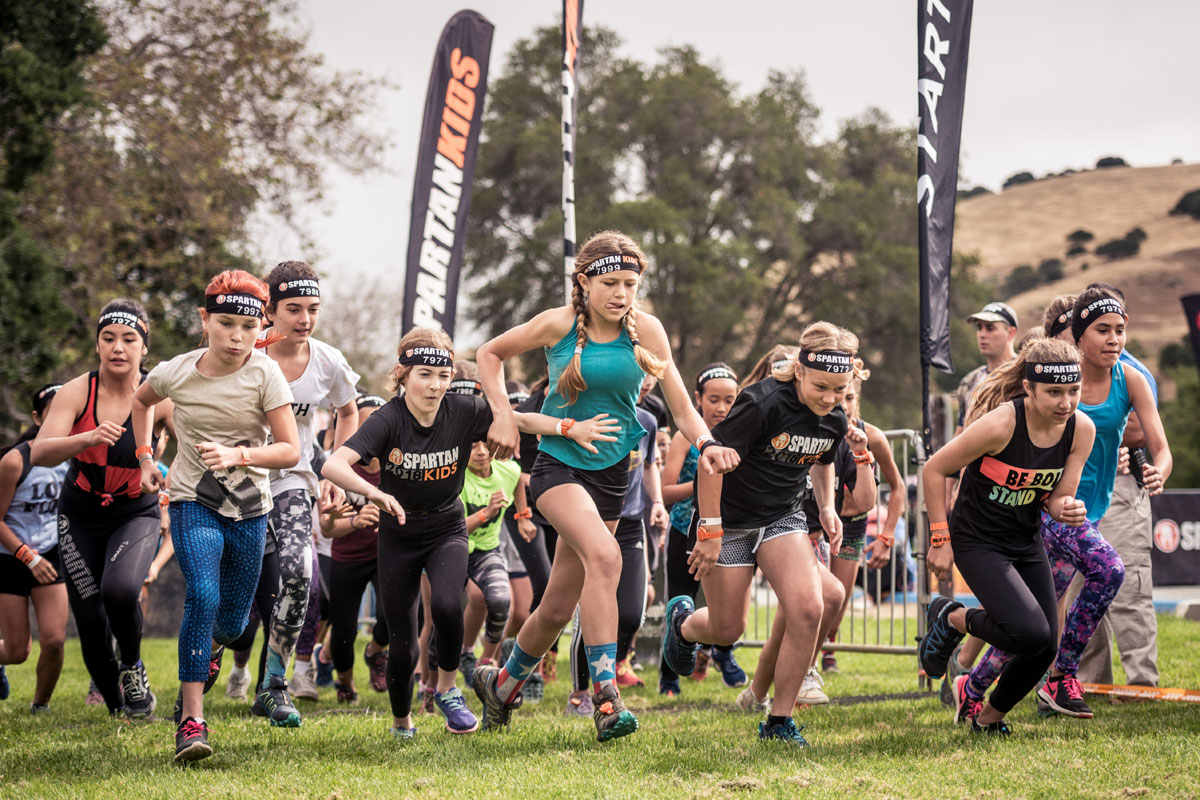 5. Climbing the Cargo Net to Overcome Obstacles at School

“My daughter Hadleigh is a no-nonsense, tough as nails, badass little girl. At least she was until she started first grade. She was having a crummy year, and during the Boston kids’ race, it all came to a head. She got to the cargo net, which that day must have seemed 30 stories high. She stopped in her tracks and sobbed. We worked together, step by step, and although her apprehension stalled her a few times, she got over that net with a huge smile on her face and finished the race strong. Whatever happened in getting over that net helped her realize her strength, and brought my strong baby girl back. She has not had any issues at school since.

6. Moving Through Discouragement and Pain in OCR (and Life)

“Each of my four children has encountered situations that have left them overwhelmed, discouraged, afraid, tearful, frustrated, embarrassed, or helpless. I also felt their pain. It can be heartbreaking when we cannot fix their problems and instead have to help them navigate through them. All four kids completed three Spartan races this year and received their trifecta, and while the races are fun, they have also taught life lessons, like hard work pays off, and it's okay to feel discouraged, sad, or upset for a moment but not to give up when life throws them an unforeseen obstacle. These are invaluable life lessons that will help all of my children in the future. They know they are strong, courageous, and can do hard things. 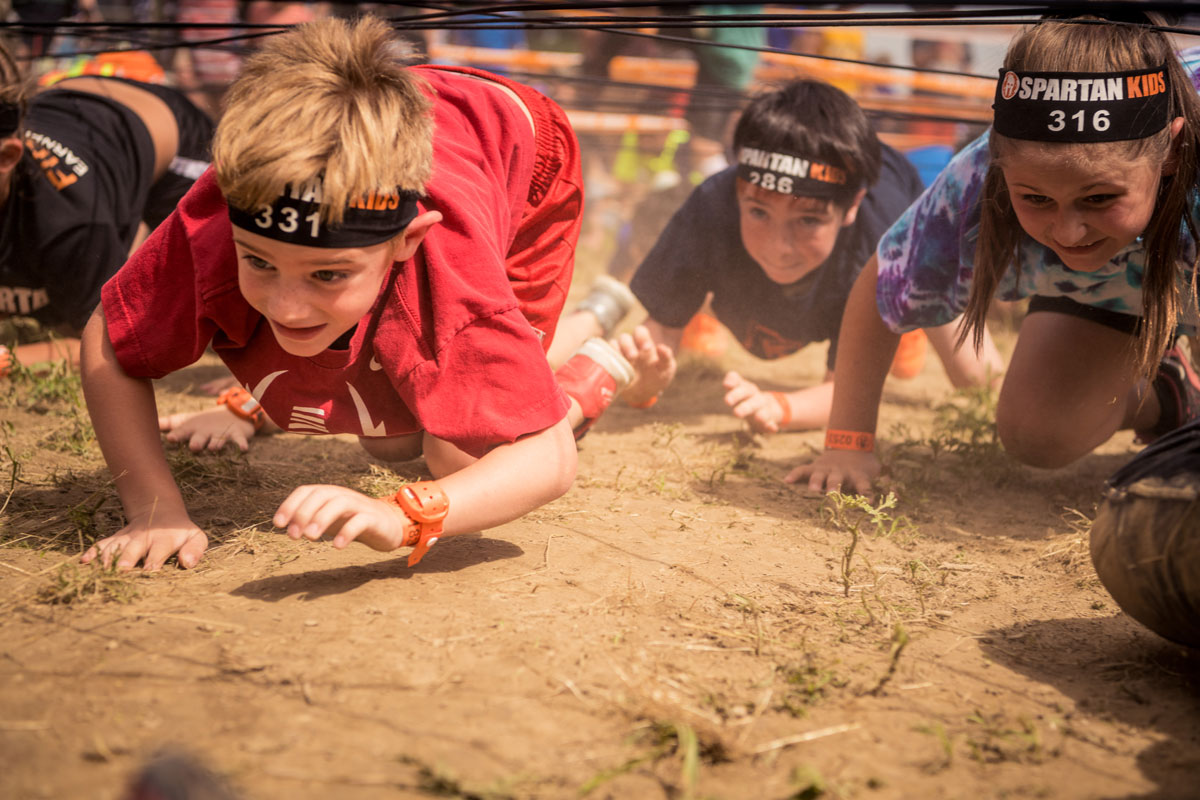 “My son has autism, ADHD, and early onset bipolar disorder. He can have severe meltdowns. Once, I did a local 5K mud run assisting an adaptive athlete and I brought him along because I couldn’t find a sitter. We were on the course for over 5 hours and he did amazing! Having something like that to focus on really seems to help him.”

“All three of our kids did their first race this past February in Phoenix. When other kids were crying and not wanting to run through the mud, my kids jumped in, without hesitation.” 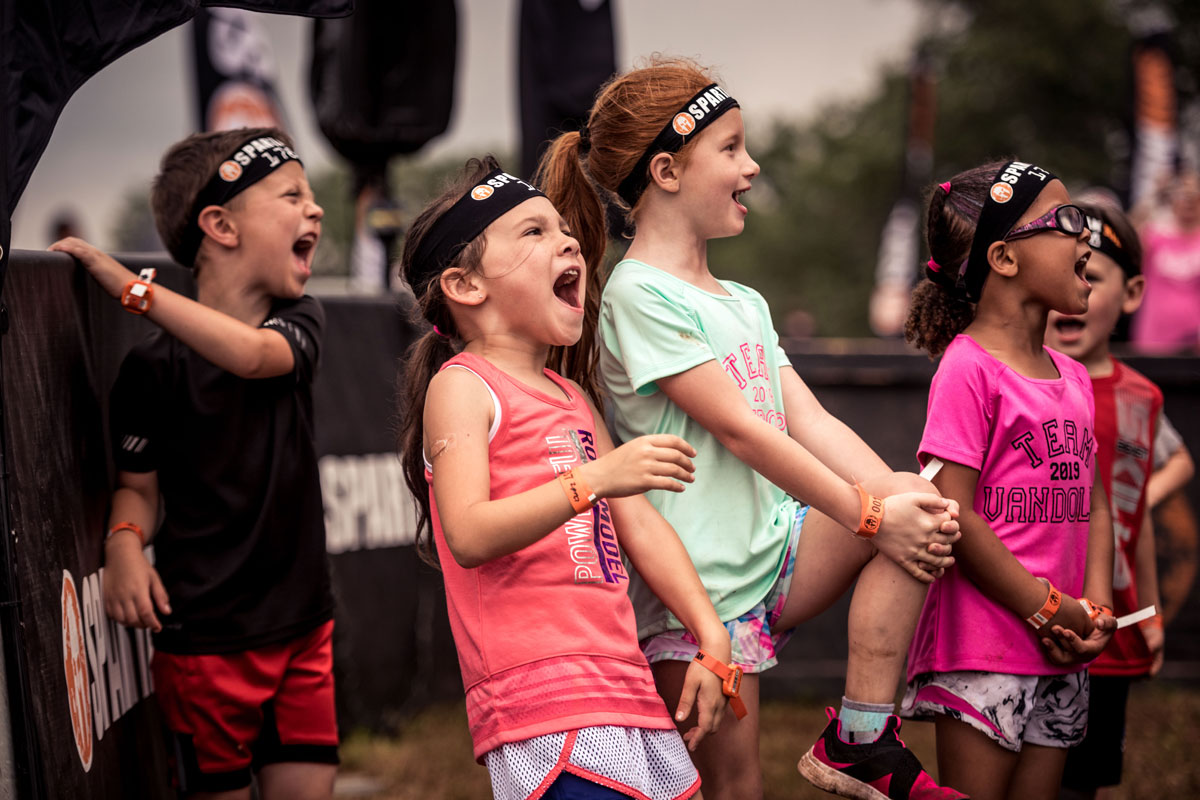 9. Recovering from Injury to Race Again Even Stronger

“While playing basketball, my oldest daughter Alexis broke her ankle. This derailed her confidence, and not long after that, a bout of anxiety and depression surfaced. She started racing and jumped at the chance to do an endurance event. The hiking alone would deter most kids, but by the end of it, she was flying by people on unstable rope climbs, and forging new techniques that were more efficient than some seasoned adults were using. Since then, she has clawed her way up from the last place on her cross country team, and is now running as fast or faster than some of her top 10 teammates.”

10. Cultivating Patience to Get Through the Course

“My teenage daughter wanted to do a mountain, so I did it with her. I’ve done two Beasts at Killington so I know how rough they are. She blew me away. People were quitting and leaving their buckets right in front of her. All she said was, ‘Dad, this may take a while.’ Quitting didn’t enter her mind. I never saw so much raw determination from her, and it was the best day of my life.” 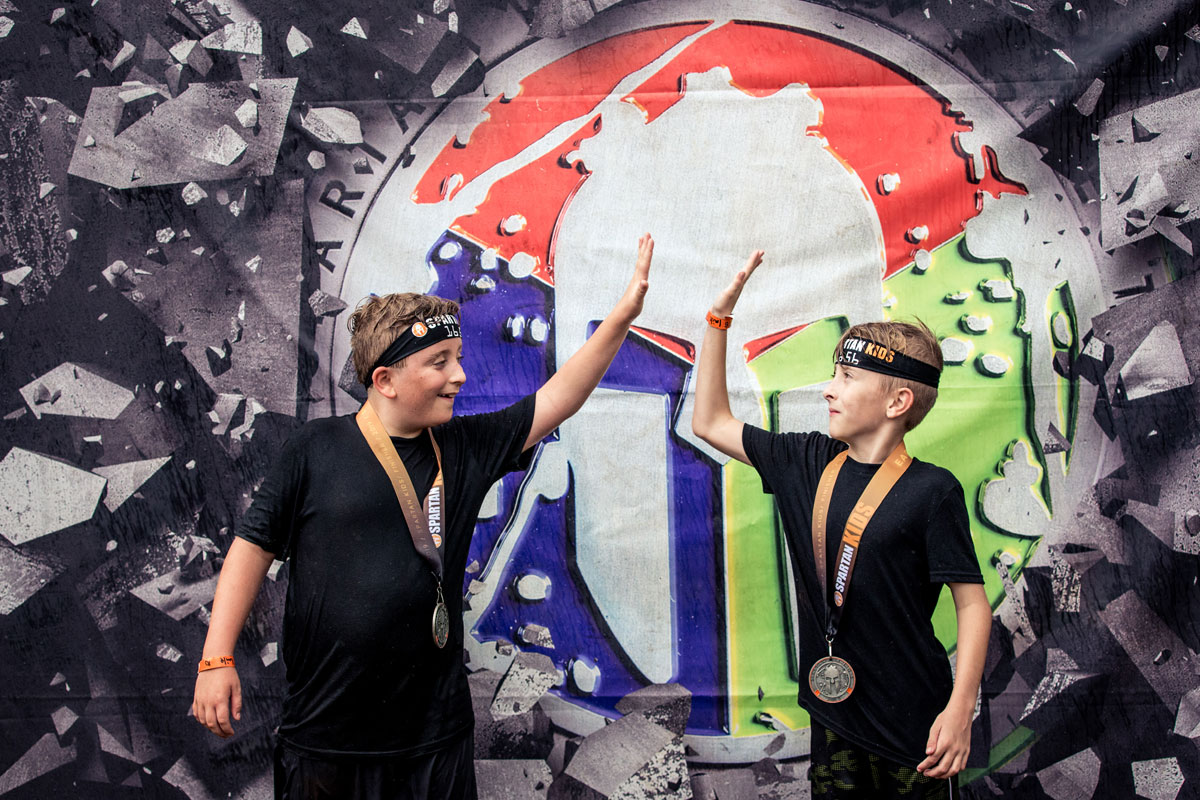