It may have been the island’s first Spartan race, but after Hurricane Maria, the Puerto Rico Spartan community was primed to test its fortitude again.

When Hurricane Maria hit Puerto Rico in September, Armando Vengoechea didn’t stop training. The Spartan SGX Coach lives in Toa Alta, 15 miles southwest of San Juan. Although local damage was minimal, the island saw sustained winds of 155 miles per hour and up to 30 inches of rain. Power and running water were out for 50 days for some, 100 days for others; downed trees and power lines bisected the streets, and amid the chaos, residents say they effectively lived under martial law.

In the months that followed, Vengoechea’s training was looking after his family. “When you have no water,” he says. “You need to fill up. I got 20 to 30 buckets of five gallons each and picked them up from the floor every day to fill the toilet and wash.”

Lizaida Jiménez grew up in San Juan, but chose to weather Maria at her boyfriend’s house 30 minutes from the city. “It was really impressive. You could hear the hurricane through the windows,” the 35-year-old says. A food distributor, Jiménez was among few whom authorities allowed to drive at night; she’d wait in four-hour gas lines to find supplies. “All of a sudden, you have nothing. No cell phone, no water, no food,” she says. Jiménez’s power came back on the day before Thanksgiving Day.

The Puerto Rico Spartan community is flourishing. The Boricuas Spartan Team brought 45 athletes to compete at Killington in 2016, and in December, the squad flew just as many athletes to the Central Florida Beast. “The original team was the Boricuas,” Vengoechea says. “But no matter which team you go with, you represent the island.”

It had been a difficult year for the island, but where mainland television audiences saw images of desolation and the political turmoil that followed, people like Vengoechea and Nelson Runaway Diaz found an opportunity to remind Puerto Ricans what they’re really made of. Last January, Diaz flew to Puerto Rico from Vermont to bury an uncle. The trip, unbeknownst to him at the time, set in motion a series of events that would bring Spartan racing to Puerto Rico.

Diaz estimates he has about 238 cousins on the island. He used WhatsApp to contact them after Maria, although Diaz says it took months to hear from a few relatives whose towns were completely washed away. The 44-year-old grew up in New Jersey and works in audiovisual systems, although his real passion is helping adaptive athletes conquer the OCR circuit.

The path brought Diaz to the Central Florida Beast in December, where his cousin Adam introduced him to the Boricuas. Then he met Spartan Race’s founder, Joe de Sena. The conversation began with a discussion of discounting the Saturday Sprint fee for the Puerto Ricans who made the trip. “They’re still trying to scrounge money to come to the US to be part of the community that got them off the couch,” Diaz says. “They don’t want to go back to the couch.”

Diaz followed up with a bold proposition: get the Puerto Ricans to go from the island to the Spartan Agoge in one year. De Sena liked the idea, and Diaz got the green light.

The schedule would be grueling: two Spartan Hurricane Heats in Puerto Rico, then the Tri-State New Jersey Ultra, then the Tri-State Tuxedo Sprint, then the Palmerton Super, the Killington Beast, and finally, the Iceland Agoge. Tougher still, Diaz slated the first Hurricane Heat for late January, and the second for late February. He needed someone on the ground to rally the OCR community, and through Adam, he met Vengoechea, the island’s only Spartan SGX coach. 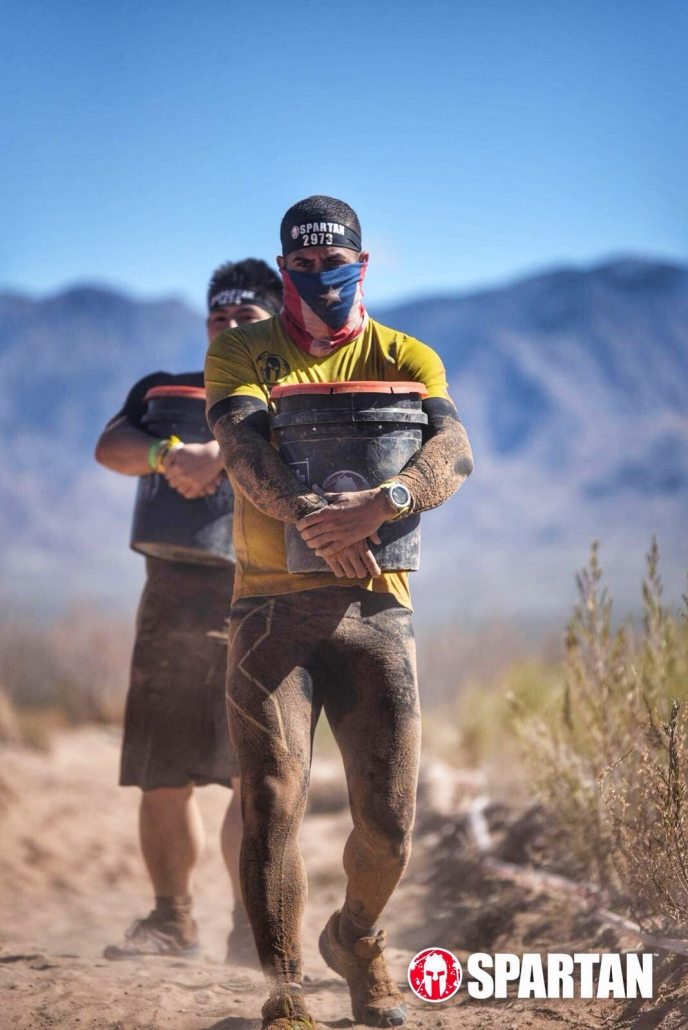 The pair had a month to put together a Spartan race on an island where power had been restored a month earlier. The venue would be the San Juan National Historic Site, a lush peninsula adorned with the turret of Castillo San Felipe del Morro—a 16th-century citadel of Alcatraz proportions. Soon, an army of OCR athletes would lay siege to the site’s beach and grassy hilltops, and Diaz and the Spartan team worked tirelessly to perfect the route and secure the tractor tires needed for the Sisyphean effort.

Meanwhile, Vengoechea put out a call to the Boricuas, many of whom had just arrived at a state of normalcy. “It took three or four weeks to get people involved and start running and doing stuff,” Vengoechea says. It was difficult, he notes, because utilities were out and no one likes running without water. He made a plea. “I said, ‘Stop it,’” he says. “We still need exercise because if you don’t exercise, things are going to get worse. You’re going to get fat and frustrated.”

Gyms were closed while insurance policies were being settled, and Vengoechea couldn’t train people in them anyway: his personal training certification was up for renewal, and the local police department couldn’t get him the proper papers. So he took the Boricuas to the streets and parks, knowing firsthand how important the routine was to his people’s collective sanity.

In 2013, Vengoechea lived with panic attacks and took anxiety medication to calm the symptoms. Then he ran the Spartan Beast in Killington Vermont, where the 40-degree weather chilled his Caribbean blood to the bone. Alone in the woods without his anxiety medication, a prodigious panic attack struck. He was paralyzed, fixating on his fear of dying of hypothermia.

He talked himself out of the panic, picked himself up from the forest floor and trudged on. Soon, he saw the light from the end of the singletrack. Before Vengoechea knew it, he was out of the woods. Killington changed him irreversibly; the experience made the post-hurricane toil of filling and lifting endless water buckets seem easy. With any luck, HHPR-001 would do the same for the Boricuas.

Without timing chips or bibs, the Hurricane Heat encompasses the post-hurricane Puerto Rican experience—no one succeeds as an individual; everyone’s strengths and skills are needed for success.

More than 100 participants from the Puerto Rico Spartan community lined the beach for the first Hurricane Heat in late January, and a month later, they came back for the 12-Hour Hurricane Heat. Linked by gear-filled backpacks and gallon water jugs, they traversed the hills and dove back into the surf for burpees. A rainbow shone overhead as they carried each other along the shore, and rain pelted their faces as they heaved tractor tires above their heads through San Juan.

If you poll Americans, 41 percent don’t think Puerto Ricans are US citizens. (They are.) Apart from the odd regional catastrophe, mainland Americans will not get to know their countryfolk in the deep sense that Puerto Ricans did in 2017. In early 2018, a chance to visit—this time under much better circumstances—wasn’t to be missed.

Lizaida Jiménez, the food distributor and Boricuas OCR athlete, returned to training in November. Her race preparation was sporadic, she says, because finding restaurant supplies in a scarce market often left her depleted. Her fitness didn’t matter: having the race in her home meant more than a result. “It’s about exploring yourself, your emotional and physical strength,” she says. “When you compare everything we went through with Maria and everything we went through with the Hurricane Heat, you get this feeling that you cannot quit. You have to keep striving, because life is so precious.”

Getting ready to tackle a Spartan race? Download The Spartan 2018 Training Plan as your blueprint. #noexcuses