While running was Nicole Mericle’s first love, and rock climbing has become her favorite sport, obstacle course racing is where she’s become a dominant force.

It should come as little surprise, given her well-rounded skill set. When she got started in the sport in 2016, the Boulder, Colorado., resident had a pretty good mix of endurance, speed, strength, and agility that helped her quickly find success in OCR. But it has been her innate competitiveness and commitment to training that helped her earn numerous podium finishes and multiple world titles over the past two years.

“It’s been a fun ride,” says the 30-year-old Mericle, who works as a professional EMT while she is studying to become a physician assistant. “I didn’t know what I was getting into at all. I think most runners have the reaction that I first had, which is, ‘Oh, runners don’t do this kind of thing.’ But I was wrong about that.”

Mericle only fell into the OCR scene after her quest to become a professional runner was cut short by an injury.  She had been a good runner in high school, running fast enough to compete in cross- country and track at Rice University. With a smooth stride and a petite, 5-foot-3 physique, she excelled at the mile, 3,000-meter steeplechase and the 5,000 meters. 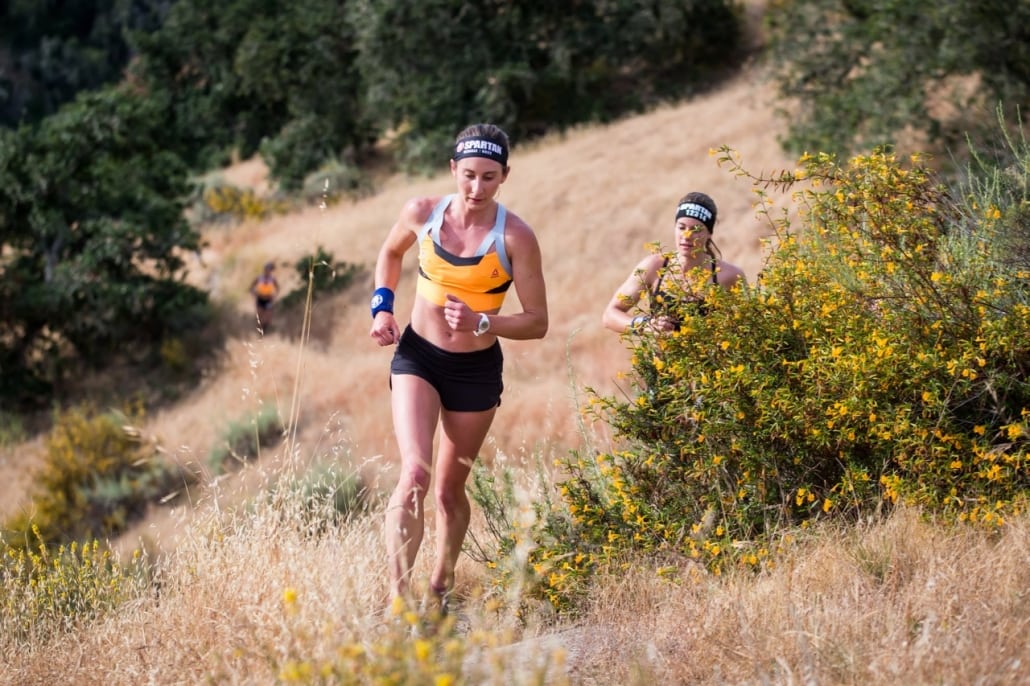 Oddly, it was her introduction to rock climbing at indoor gyms in Houston that might be have been the biggest catalyst to her future OCR success. Although her coach balked and eventually forbadeid her to climb—thinking that climbing would give her too much upper-body muscle for running—but the bug had already bitten her, and she liked the added strength.

She moved to Boulder after graduating and trained with elite running coach Brad Hudson for a summer, but a frustrating and hard-to-diagnose labral tear in her right hip kept her from making any progress. Essentially, she couldn’t keep running effectively on the roads or a track whileand maintaining an efficient gait pattern. Over a two-year period, she saw numerous specialists and went through a battery of tests—including a 3-D gait analysis and a nerve test—as well as endless physical therapy treatments, without coming up with a definitive solution.

Although she couldn’t run much, she could scale rocks. She immersed herself in climbing, both indoors and outdoors, improving her skills and starting to build up her strength. Eventually, she was able to run on trails, and after some successful results in short-distance trail races, she considered a deeper foray into ultrarunning.

But then, in the spring of 2016, a friend of a friend convinced her to enter an obstacle course race.

At the Spartan Super race at Fort Carson south of Colorado Springs that May, she found instant success. It was a nine9-mile race—the farthest she’d run in a long time—but, despite missing the mark on the spear throw and the laser gun obstacle, she placed third.

“And I won $750 . . .… which was kind of a lot of money,” she says, grinning. “I had won $200 in a running race in Boulder once, and I thought that was a pretty good deal. It wasn’t about the money, but everything about that first race made me realize that it was something I wanted to pursue.

“I remember when I signed up for the first race, I was confident I could do well, but I had no idea what it would lead to and how big it would become. I just didn’t think there was a competitive scene in it, and I didn’t really want to do something for the hell of it.”

Her early success compelled her to sign up for more races, but she wound up with mixed results. Typically, her endurance and running ability served her well and allowed her to take a big early lead, but her inability to execute heavy-carry obstacles were was always a big setback. She says she lost 5 to 15 minutes trying to pick up and carry two 40-pound sandbags in her ensuing races, a deficiency that often left her off the podium.

“I needed to figure out a way to get stronger and change my body a bit while still being able to run pretty well,” Mericle says. “That first season I had was really up and down. I could get out fast but I’d always lose time on the heavy carries. I was pretty strong from climbing, but not strong enough and not exactly the kind of strength I needed.”

She had been doing a couple of Olympic-style lifting sessions a week but realized that lifting heavy weights didn’t really equate to carrying something heavy over a specific distance in a race. She changed up her lifting routine a bit and also invested in her own set of sandbags—a 50-pound rec bag, two 40-poundt pancake bags, and a series of 30-pound sandbags from Home Depot. She got in the habit of carrying a couple of sandbags at the start of a trail run once a week, then completing her run and carrying them back to her car. 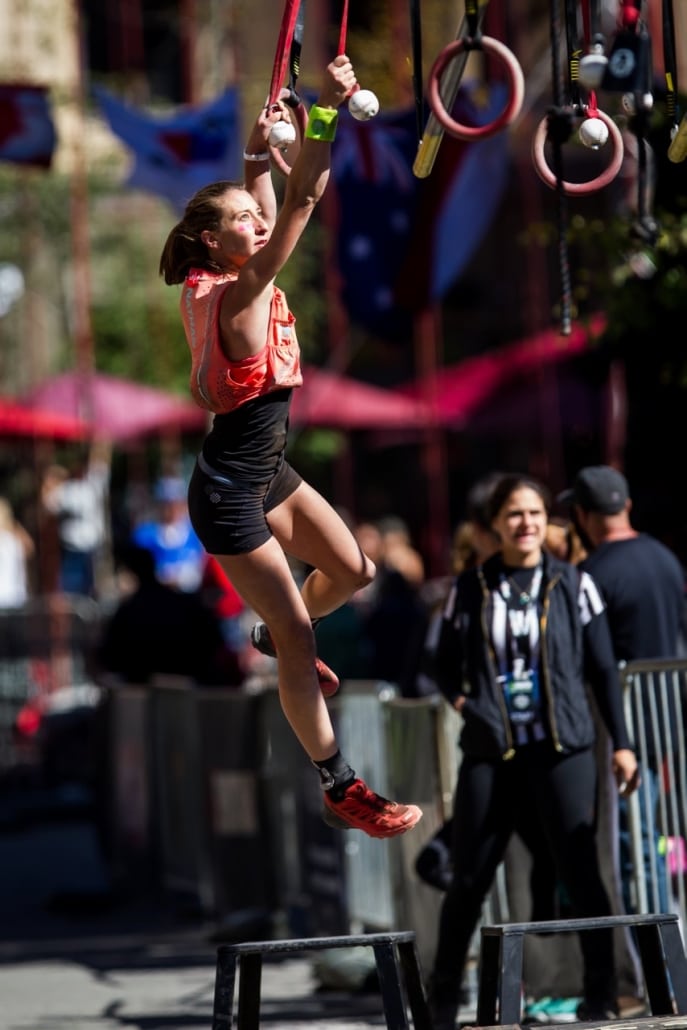 In addition to one modified gym lifting session a week, she otherwise builds strength from climbing as much as she can. In the summer, she hits some of the many world-renowned routes in Boulder Canyon and Eldorado Canyon, but she also visits Movement Climbing and Fitness rock gym at least three times a week and as many as six times a week in the colder months.

The subtle changes to her training resulted in eight8 pounds of added muscle, which has improved her carrying ability without negatively impacting her running. Mericle still runs five or six days a week and racks up about 50 miles, but she never runs on the roads or a track anymore. Fortunately, she’s blessed to choose amongwith a choice of 200 miles of dirt trails in and around Boulder, so she never gets bored from running the same route too often.

She also earned a spot on the Spartan Pro Team for the past two years and garnered sponsorships with Salomon, AltRed, Darn Tough, and Honey Stinger.

“I’m going to keep doing this as long as I can be competitive,” Mericle says. “Most elite runners I know think it’s cool, but they don’t want to have anything to do with it. But at the same time, I think just in general there are more runners doing more things and looking for something else, whether that means ultrarunning or triathlon or rock climbing or obstacle course racing.”

To build and maintain her grip strength for obstacle course racing, Nicole Mericle typically does a weight lifting session in the gym once a week and also endures a sandbag carrying routine once a week. But the way she gains specific strength for some of the grip-related obstacles in Spartan rRacing (rope climb, traverse wall, Hercules hoiste, bucket brigade, the twister, etc.), she dedicates one night a week of to climbing intervals at a rock gym in Boulder.

“My favorite workout is a set in which I do consecutive climbs on rope, where you climb hard, easy, hard, easy, hard,” she says. “You basically go up the route and get down from the wall and you get right back on, so it’s a really good workout.”

“Doing those five climbs without any real break takes about 20–-30 minutes, and you I get quite a pump from that, especially if I do the whole thing twice,” she says. “That kind of workout has really helped improve my endurance grip strength and lock-off hang strength for holds at 90 degrees, and that’s key to getting through some of the obstacles (tTwister, monkey bars, etc.) fast and efficiently.”