This summer, we launched the Spartan Spirit Awards to celebrate the people who truly embody the key Spartan values: grit, determination, and perseverance. Whether they’re a leader on the course or within their community, a relentlessly hard worker, or a passionate advocate for others, our award winners show what it really means to be a Spartan. Today we recognize Kirk Framke—a badass athlete who has his sights set on Tahoe—as our latest Spartan Spirit Award recipient.

Benjamin Disraeli, a British politician who twice served as UK Prime Minister, once shared: “One secret of success in life is for a man to be ready for his opportunity when it comes." It’s a secret that the winners of our Spartan Spirit Awards, celebrating people who embody the key Spartan values of grit, determination, and perseverance, all have discovered. Whether they’re a leader on the course or within their community, a relentlessly hard worker, or a passionate advocate for others, our award winners demonstrate daily what it means to be a Spartan. This month’s winner, Kirk Framke, is no exception.

When Framke wrote to Spartan headquarters this summer, requesting an exemption allowing him to register for the Spartan World Championships in Tahoe, he had a worthy goal: To win a medal at two world championships--triathlon and OCR--within a single year. He also had a history of supporting Spartan: The Denver public school teacher had introduced several hundreds of kids to OCR through a partnership he’d forged with the Spartan Foundation.

Related: Train Like a Champion: A Q&A with Johnny Luna-Lima

What Framke didn’t have was the required number of rankings for a guaranteed entry to Tahoe: his teaching commitments prevented him from taking time out of the classroom to travel to enough races to qualify by rankings.

It takes a different breed of athlete to rise the ranks in not one endurance sport, but two. Framke had already proven himself to be just that kind of athlete in both OCR and tri. Last year, he finished second in the 40-49 age group at Spartan Worlds. In 2016, the last time he competed in ITU tri world championships, he was the only male worldwide at any level to medal in all three tri distances. It’s a feat that hasn’t been duplicated since. He wrote with confidence of achieving a double-medal: “I do have a realistic chance of accomplishing this goal.”

Ambition like this warrants a response, and it wasn’t long before Spartan HQ not only granted Framke entry but decided to celebrate him with the distinction of a Spartan Spirit Award. We reached out to uncover what it takes to have a shot at two endurance world championships in the same year.

A Q&A with Spartan and Public School Teacher Kirk Framke

SPARTAN RACE: What inspired you to write to Spartan to request entry to Tahoe?

KIRK FRAMKE: When I was thinking about my 2019 race schedule, I assumed that the qualification would be the same as the past two years, [but] changes in qualifying made it impossible [to qualify for] both sport’s world championships. I love Spartan and triathlon racing and I didn't want to choose one over the other.

I hoped that explaining my circumstances would allow me to race. I think it is better to have tried and been told no than not to have tried at all. The hardest part of this process was writing that first email. 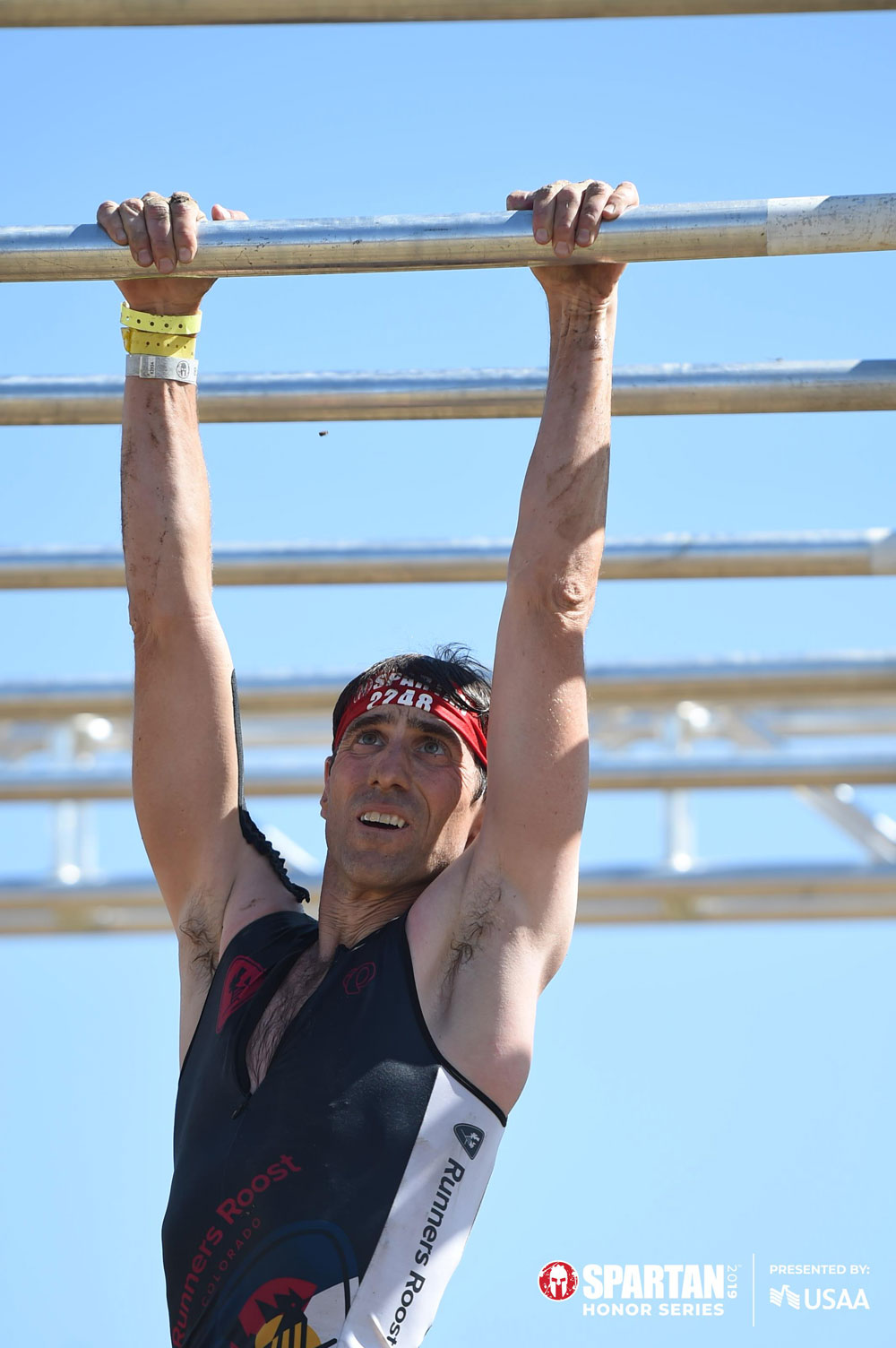 SR: What motivated you to become an endurance athlete known for a pursuit like this?

KF: I was always into sports. I am dyslexic and it had a profound impact on me as a student. I failed often and had to put forth an effort beyond everyone else just to keep up. Sports gave me a sense of self-worth. In high school, I earned 11 varsity letters in 6 different sports.

I became hooked on endurance racing the summer between my junior and senior year. I didn’t know if I would play sports in college, and a friend suggested that we sign up for a triathlon. I didn’t place well but it didn’t matter--I was hooked.

Spartan came along much later [2012], at a time when I desperately needed it. I had been racing triathlons, but I was getting burned out on swimming, biking, and running exclusively. I competed in a local 5-mile running race and a member of the Spartan Street Team (thank you, Chris!), was running a burpee challenge with a free entry into the Ft. Carson Spartan. I crushed the challenge and won the entry.

Related: What are Burpees and How to Do a Burpee

The next weekend, I was at the Army base and I had the most fun I’d ever had at a race. The mud crawl even required an M-16! After the race, my wife even commented that I was smiling in the photos and I NEVER smile in a triathlon race picture.

SR: Once you started, what kept you going?

KF: I try to find things that will keep me excited while training, and provide a sense of meaning. I’ve been competing in endurance sports since I was 17, so after 29 continuous years of racing, I look for things I haven’t done or events that may not have been previously connected before. In 2016 the International Triathlon Union (ITU) scheduled their draft-legal sprint, Olympic, and long-distance world championships on back-to-back weekends. Since the races were reasonably accessible from Denver I wanted to see if it was possible for me to earn a medal in all three events.

After the 2016 season ended, I wanted to focus more on OCR in general and Spartan specifically, yet I wasn’t ready to leave triathlon. I had dabbled in Spartan during the triathlon off-season and loved how every race was different. I knew I was aging up to the 45-49 age-group in 2019, so I started to think about attempting to compete in both triathlon and Spartan world championships in the same year, with an eye to medal in both sports. I’m not sure how many, if any, athletes have been able to achieve a spot on the podium in two different sports in one year. This seemed like a noble goal to pursue.

Related: How to Get Ready for a Spartan Race 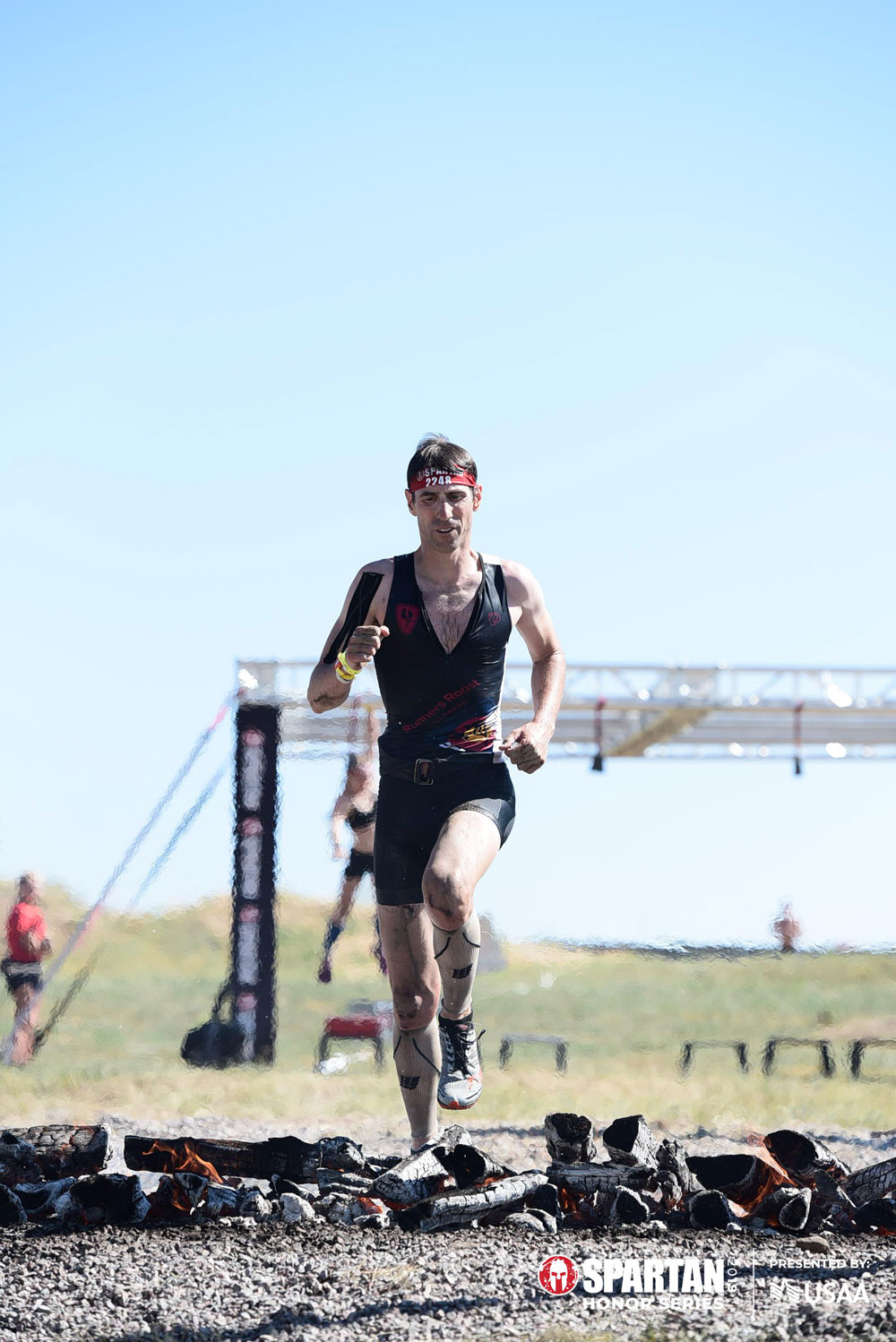 SR: An attempt at two world championships is a feat. How do you balance it all?

KF: Knowing when not to push is something I struggle with. I want to push all the time, whether it’s in my athletic pursuits or professionally.

I don’t see the point of striving for a life of comfort when there is so much to be discovered about yourself and the world around you.

As I’ve gotten older I simply can’t do what I used to and I need more rest. I still have two training sessions a day, but one is more recovery-oriented. I plan out my weekly training schedule around a handful of key workouts for each sport and fill in the rest of my training with endurance efforts.

I wish I could say my recovery was me in a deck chair hanging out at the pool, but the reality is that I’m either with family, at work, or training. I never have downtime and I prefer it that way. I try to live in each moment so if I’m going to the zoo with my daughter or tossing batting practice to my son, the only thing that matters is being with them, not the biking session I have in the afternoon.

KF: I like to go into every training session and race with a plan: rarely do I just go out for a run or a ride without a stated goal of the session. I verbalize the goal before I start, [which] helps me hold myself accountable. Races are the same: I think of different scenarios I might encounter and how I would respond. In particular, I try to plan where in the race I want to focus my hardest efforts and where I can gain the greatest advantage. I also allow being flexible with my plan.

I allow for failure, too. I still fail and it’s not something to be afraid of. The value of failing, learning from that failure, and overcoming that failure is what gives me a sense of accomplishment.

Related: Want to Enter an Elite Heat? This is What You Should Know

SR: What mantras do you rely on for strength?

Related: How Mantras Can Up-Level Your Performance

Think you know someone who deserves the Spartan Spirit Award? Nominate them, here. Each month, we spotlight a new honoree!