When word spread that the 2018 Spartan Ultra World Championship might be staged in Iceland, Joshua Fiore thought: ‘Wouldn’t Iceland be a nice place to propose to my girlfriend of five years?’ As Fiore would later explain about his plan to propose to Cheryl Puello, this idea led to several good outcomes, including — he says — a winning race effort.

“It’s such a beautiful place,” he told me when we met up at Mountain Strength CrossFit in Winchester, Mass., a gym he used to coach in. The more the 36-year-old Fiore considered the idea, however, the more the enthusiasm waned. “It seemed overdone,” he said. “You get on a boat or a tour to see the Northern Lights, bend down on the knee and then propose.”

“I thought about proposing to her at the finish line," he said. "But many people had done that kind of thing, too.”

Fiore’s face lit up, he leaned forward and smiled.

“But what if I won the race and proposed? Now that would be cool!,” he broke out with a laugh. “That’s when I found out Robert Killian was going to be there, and it’s like, ‘All right, well, it would still be cool if I propose to her on the finish line.’”

At noon that day, at the race start near Reykjavik, with Puello serving as his one-person support crew, Fiore launched into his plan. He had tucked a white gold diamond ring into a zip-locked pocket within a compartment of his Salomon hydro-pack, next to a space blanket.

Fiore had ample time to visualize and fine-tune his proposal plan.

“Twenty-four hours gives you a lot of time to think about how you will do something.”

That said, sleep deprivation, mixed with a hard race effort and mere four hours of daylight between Iceland’s sunrise and sunset in December, can blur the best laid plans. The thinking time allowed Fiore to brainstorm his plan (cross the finish line; fain a collapse as he made his way to Puello, then swoop into the customary kneeling position; propose) but as he polished off the remaining obstacles and burpees, he realized he had forgotten to seize a moment to take the pack off and extract the ring from the secured pocket to have it in hand. Which lead to three unforeseen moments of drama.

At the multi-rig and in the lead, he asked a friend to help him with the pack then cried, "No!" He could have broken a rule about aid on the course. After winning, he yanked off the pack and went for the zip-locked compartment.

“But my hands were frozen,” he said.

“Mark’s a big, strong guy," Fiore said. "He came over and just ripped the thing open.”

The ring went airborne, much to Fiore's distress.

"It's a white gold ring and there's ice everywhere," he said. "But I looked and there it was: it had landed on my pack." 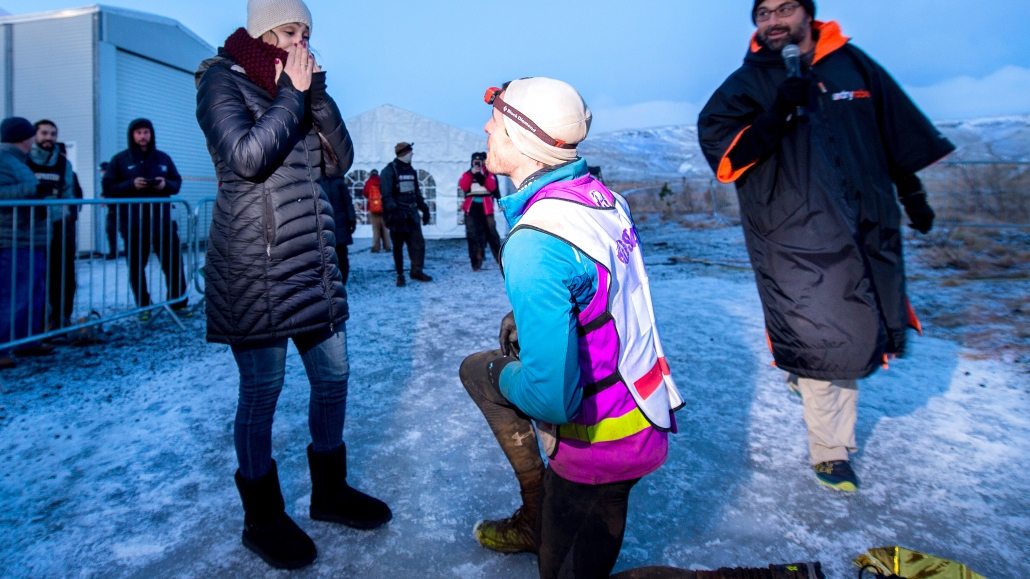 One other detail also came into place: Puello said yes.

In hindsight, Fiore is convinced that carrying the ring with a plan to ask his girlfriend to marry him worked to his favor competitively.

“I think it helped me on a subconscious level,” he said. “It made me run more relaxed. If I didn’t win the race, so what? I was going to be going home with my fiancé.”

If You're Afraid of Failing, Here's Why You Should Immediately Do It.